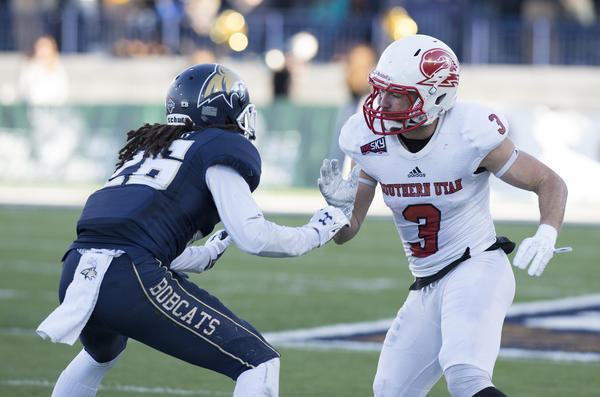 MR says: After spiraling into a series of bad choices that left him completely lost, receiver Justin Brown recalls the day he “was smashed by the Spirit, hit hard. I had never felt anything like that in my life. I knew I needed to serve the Lord.”

In the spirit of the Thanksgiving season, it was easy for Justin Brown to consider his blessings.

Seated in an empty Southern Utah University classroom, the senior wide receiver smiled as he talked about big plays made, touchdowns scored, thrilling victories and the joy of contributing to the Thunderbirds’ historic 7-3 season. He took great satisfaction in knowing SUU was one win away from clinching the Big Sky Conference title.

But even more worthwhile than the gridiron success, Brown was grateful for the experience and life lessons learned off the field that have helped him get to this point.

About five years ago, Brown almost ruined his opportunity to play college football by “doing dumb stuff and getting in trouble with the law,” he said. At one point, the 6-foot-2, 207-pound receiver was suspended indefinitely from the team and told by his coach not to come back until he had grown up. Rediscovering his faith and serving a mission for The Church of Jesus Christ of Latter-day Saints changed the course of his life and made him the person he is today, he said.

“At that point in my life, I felt really lost,” Brown said. “Serving a mission helped me to grow up and realize that school was important, that I had a great opportunity to play for a great university and coach. When I came back, I felt more mature and composed. The mission settled me down a lot.”