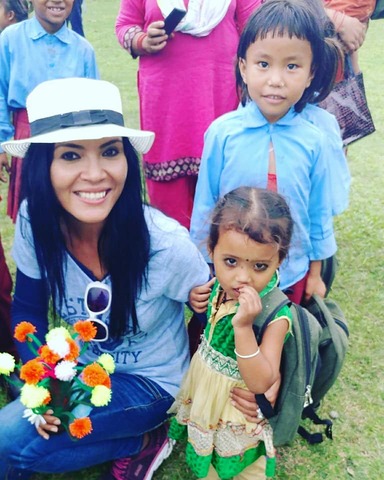 When Usha was a child, Usha’s older sister invested in more than just her education. She also bought Usha vitamin drinks so that she would grow tall and one day participate in the Miss Nepal pageant.

Usha did grow tall, reaching five-foot-seven when none of the girls in her family stood more than five feet. And after her first semester of medical school, Usha decided to compete in the Miss Nepal pageant.

Usha made it to the finals, where she was presented with a contract to sign. The contract would obligate Usha to do whatever the pageant organization required of her, and Usha felt that she could not sign without compromising her new commitment to Christ.

After “battling a lot” in her mind, Usha wrote “no” to the requirements of the contract.  It came as no surprise to her when she was not selected for the top 10.

As an eliminated contestant, Usha was required to share her thoughts on a live interview broadcast to over 3 million people. The emcee expected Usha to be disappointed, but Usha couldn’t hide her joy.

“How do you feel now, being out of the competition?” the emcee asked.

“I started smiling,” Usha says, noting that her friends and family could see her genuine happiness from the audience. “I just said, 'I’m very happy for all my friends who succeeded. I know that love rejoices at the successes of others instead of being envious.'”

“All the Nepalis heard that,” Usha says. “I heard everyone clap . . . after that I became very popular everywhere.”

Usha is quick to say that she doesn’t condemn pageants or those that participate in them. “They’re good people too," she says. "I have lots of good friends there. But that was not my path."

Usha continued studying at the medical school and meeting with the Jehovah’s Witnesses. One day, a new emergency medic teacher from the United States showed up in one of Usha’s classes. Since Usha had heard that people in the west have given up on faith, she decided to approach him.

“Are you a Christian?” she asked.

The question caught the man off guard, as he’d been told he wasn’t allowed to proselytize in Nepal. He didn’t say anything.

“Do you belong to a cult or a sect? Why are you so scared?” Usha asked.

The man just smiled and said nothing.

A week later, however, he approached Usha. “I’m a Christian,” he said, handing her a book. “This is what we read. This is the Book of Mormon, another testament of Jesus Christ.”

Usha accepted the book but didn’t read it. The Jehovah’s Witnesses had told her that the Bible was the only book of scripture. “I was like, okay. Maybe he’s the false prophet they were talking about,” Usha says.

Usha's new teacher approached her on several occasions to ask about the book and share his testimony, but whenever he spoke, Usha would pray in her heart, “Help me not listen to this false prophet.”

After a few months, however, Usha’s mother was diagnosed with terminal cancer. “Because I was very close to my mom, I thought my whole world shattered,” Usha says.  She wondered what would happen to her mother, who was Hindu, when she died, and she wasn’t satisfied with the answer of the Jehovah’s Witnesses.

That’s when her LDS friend shared Alma chapter 40 and told her about the spirit world. This time, she listened.

Usha read the Book of Mormon, prayed according to Moroni’s promise, and began searching about Mormons online. She read about the Word of Wisdom, and although she loved tea and coffee, she decided to give it up. She also started paying tithing to the Jehovah’s Witnesses, even though they don’t require it.

After several months of not speaking to her LDS friend, Usha called him up. “Hello. I know the Book of Mormon is true. I know the Church is true. Can I be baptized tomorrow in your Church?” she asked.

For several moments, her friend was speechless. Then he explained that she would have to come to Church a couple times and meet with the missionaries before she could be baptized.

“What do you need to teach more?” Usha asked. “I know the gospel of Christ, the plan of salvation, and the Restoration, too.”

“Some commandments,” he said.

“The Word of Wisdom?” Usha asked. “I haven’t drunk tea and coffee for about three months now. And tithing? I do that, even though the Jehovah’s Witnesses don’t need it. And chastity is not a problem because we are brought up that way. Any more commandments? Let me know.”

Two weeks later, Usha was baptized. Although none of her family attended the baptism, only one aunt vehemently objected. “She shunned me,” Usha says.

At the Kingdom Hall, they announced that everyone should stay away from Usha because she was a “dangerous lady.” Although Usha had never officially joined their church, she had brought about 50 of her friends into their congregation, and they knew people would follow her.