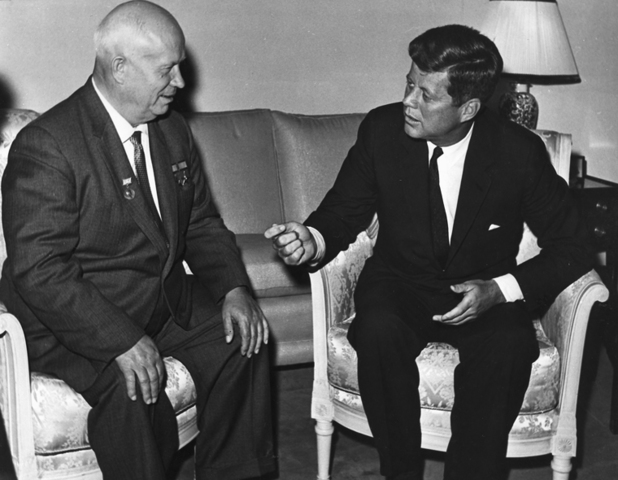 During the Cold War, Ezra Taft Benson—then U.S. Agriculture Secretary—hosted Soviet Premier Nikita Khrushchev and his family during their visit to Washington D.C. in 1959. With tensions high and hostility continuous between the U.S. and the Soviet Union, President Benson did not welcome the opportunity.

While touring farms and driving to some of the Capitol’s cherished sights, President Benson’s son Reed took advantage of the long car rides to share what developed into a 40-minute discussion about the Church and LDS beliefs.

Later, Khrushchev’s son-in-law invited Reed to “Come to Russia and do some missionary work for your Church” (Brother Paul’s Mormon Bathroom Reader, Paul B. Skousen, 2005). At a time when religious freedom was restricted in the Soviet Union, Reed took advantage of this call to missionary work to send Nikita Khrushchev and his family six copies of the Book of Mormon.

The Soviet leader later repaid President Benson's hospitality by inviting him to Moscow. While in the Soviet Union, President Benson asked to meet with a group of Christians in the capital who were given permission to worship together—one of the few churches still open in Moscow. It was while in this church President Benson was called to speak at the pulpit. The Ensign says of this rare event:

Choking with emotion, he testified in that city to the reality of the Lord Jesus Christ.

His words were translated into Russian. With each sentence, nods of assent were seen throughout the congregation. Women removed their head coverings and wiped their eyes. Men rubbed away the moisture that blurred their vision. The hardened news correspondents who came because they felt they were compelled to as part of the Secretary’s entourage, and who at first had no interest in this religious gathering whatever, now wept with the congregation.

It was a solemn moment. Hearts were melted. A spirit enveloped the worshippers such as they had never felt before. Hands folded and heads bowed in humble prayer.

“I firmly believe in prayer,” the voice of the Secretary continued. “It is possible to reach out and tap the unseen power which gives strength and anchor in time of need. Be not afraid. Keep God’s commandments. Love the Lord. Love one another. Love all mankind. Truth will triumph. Time is on the side of truth.”

The American press then slowly walked down the aisle toward the door with a humble attitude in complete contrast to that with which they had entered. As they passed the pews, anxious hands and hungry hearts reached out to them. Then from thankful lips came the strains of “God be with you til we meet again. …” although everyone realized that this hope would likely never be fulfilled in mortality.