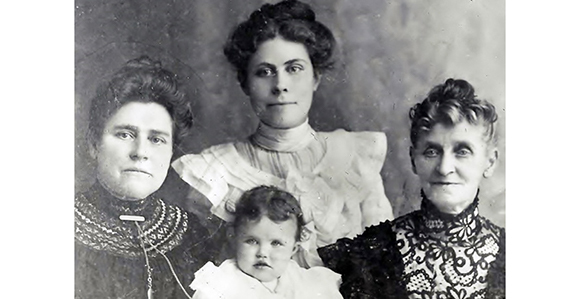 “On one of these occasions Brother Halliday blessed me and confirmed upon me the promise that I should write in prose and in verse and thereby comfort the hearts of thousands.”

In 1848, Miriam Slade visited her cousins, the Hills, in southwest England. They always looked forward to seeing Miriam, for she brought a certain fun charm and attitude when she was in town. However, this time was different: she had recently adopted a new religion, and all she could seem to do was talk about it. She told her family: “God had spoken from the heavens to a man named Joseph Smith; the Gospel was restored to the earth, the honest in heart were commanded to gather to the land of Zion for safety, for this was the last Dispensation, and the hour of God’s judgment had come!” She had joined The Church of Jesus Christ of Latter-day Saints.

The Hills were shocked and a bit amused, for Miriam seemed to be very committed to the new church. Anxious for her cousins to experience her same joy, Miriam invited all who would come to a small gathering hosted by local members of the faith. No one volunteered to join, except 12-year-old Emily. Emily describes her younger self as “hungry and thirsty for truth” and “much concerned about my eternal salvation.” So, she walked five or six miles with her cousin and other believers to a meeting that would change her life forever.

As she listened to the small crowd of Saints testify of what they knew to be true, Emily reflects, “[God] was in their midst. . .‘The way’ was open before me, and simple and young as I was, I instinctively knew that ‘I could not err therein.’” Emily had found the answers her youthful, open heart longed for. She found where she belonged. She had found the truth.

Her parents did not approve, saying she wasn’t old enough to know for herself what was right and what was wrong. She wasn’t allowed to be baptized. For four years, she sat memberless by baptism but believing entirely that God had restored His church through a modern prophet, Joseph Smith. She attended as many Latter-day Saint meetings as she could, hoping for the day her parents would let her get baptized.

That day came when missionaries visited her family four years later. Instead of listening to them alone, one of her older sisters, Julia, joined her and, after hearing the elders’ testimonies, said of Joseph Smith, “If ever there was a man of God I’m sure he is one, and I'll be a Latter-day Saint, too!” Finally, Emily had a fellow follower in the family. They were both baptized on March 5, 1852, Emily at age 16 and Julia at 19.

Four years passed and the now-20-year-old Emily desired to sail to America to join the Saints in Zion. Julia desired the same, and the two left England in May 1856. Landing in New York, the sisters traveled to Iowa City, joining the Willie handcart company. Sixty-eight people died on the cold, barren trek west before reaching Salt Lake City on November 9, 1856. Julia and Emily, though weak, survived. Years later, remembering the dire details of her company’s trek, Emily wrote these lines:

“Ups and downs are our fate; for the best ‘tis I ween.

Some woes we forget as though ne’er they had been.

But while memory her hold of my being retains

I’ll remember the lesson I learned on the plains.

If fortune witholds what I deem would be good,

I try to be thankful for shelter and food.

If disposed e’er to murmur, the wish is controlled

When I think of that season of hunger and cold.”

In June 1857, Emily married Dr. William G. Mills, and together they had one child. Three years into their marriage, William left on a mission to England. For four years, Emily was alone with her daughter. When she finally received a letter from her husband, it said he was never coming home. He denounced the Church and said he’d never see Emily or their daughter again. Of this heartbreaking abandonment, Emily said, “All that I had hitherto suffered seemed like child’s play compared to being deserted by the one in whom I had chosen to place the utmost confidence.”

All in a matter of months, Emily lost her husband and her house (which was sold from under her) and struggled as a suddenly single mom. In longing despair, she wondered what to do. This was not the Zion she had dreamed of 10 years before when boarding an English ship with her older sister. Back then, she was a bright-eyed 20-year-old looking to join the people of God in His chosen land. Just eight years later, she was looking for a bed to sleep in. While distressed and anxious in thought, she heard a voice in her mind, “as if audibly spoken, TRUST IN GOD AND THYSELF.” Inspired, she instantly wrote the following lines:

“What! Though thy flesh and thy strength should fail?

Surely ‘were better to wear than rust;

Than never to try, ‘twere better to die,

In striving bravely to fill our trust,

But fear not thou, for God! Is good—

He is the giver of strength and wealth.

When faithless feelings or friends intrude—

Trust thou in God! And thyself.”

Later that week, she found a new home, and later that year, she remarried. With her new husband, Emily had eight more children. Her second husband, Joseph Woodmansee, was a faithful partner, in both marriage and the gospel. Of him, Emily writes, “Misfortunes have befallen him but have never affected his faith, he has proven his allegiance to the principles and priesthood of God at considerable sacrifice to himself and family, enduring reverses uncomplainingly.”

More secure, and witnessing the blessings of her faith, Emily became a beacon of hope to those around her, especially through her poetry. Fulfilling the promise uttered at the hands of Brother Halliday long ago, Emily inspired the Saints with her own hands and pen. One particularly powerful piece comes from the Mormon Women’s Protest held in Salt Lake City on March 6, 1886. The protest was in response to a United States federal law that took away Utah women’s right to vote, a right that had been protected by territorial legislation since 1870. The event included a number of speakers—all women—who rallied together to speak out against the injustices of the law. One of the speakers, Miss Nellie Colebrook, was assigned to read a poem that Emily, then 49, wrote for the occasion. Among the rousing lines of “Give the ‘Mormons’ Their Rights,” the final stanza reads:

“To statesmen we turn, yea, we ask for protection,

In the land that with blood, was from tyranny freed;

Must the ‘Mormons’ to-day be the only exception

To the hosts who can honor their conscience indeed?

Concede to the ‘Mormons’ their God-given rights”

It wouldn’t be until 1919 that Utah women would have their voting rights protected again, but the voices and courage of early Latter-day Saint suffragettes were felt. Many involved, including Emily, formed the foundation of what it means to be a modern Latter-day Saint woman.

Emily Hill passed peacefully away on October 18, 1906, in Salt Lake City. From an innate internal desire to good, a young girl received the gospel, and a devoted follower of Jesus Christ had been born. Emily left family in England, pulled handcarts across the plains, found faith in hard times, gratitude in good times, and fought for women’s rights. She is a pioneer on many fronts, and her poems ring as true today as they did when she wrote them. She dedicated her life to God, and in turn, He dedicated His time to her, blessing her and her family. Emily Hill’s committed example to her faith is proven by her legacy and her oft-sung verse,

“As sisters in Zion, we'll all work together;

The blessings of God on our labors we'll seek.

We'll build up his kingdom with earnest endeavor;

We'll comfort the weary and strengthen the weak.”