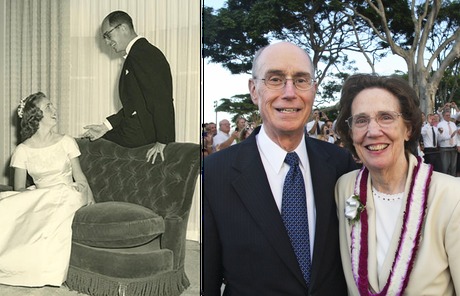 The Romantic, Life-Changing Thought President Eyring Had When He First Saw His Future Wife

The Ensign recently published an article written by Elder Jeffrey R. Holland focusing on the remarkable life of President Henry B. Erying. Among the incredible stories shared was a rebuke President Erying received from the Spirit that changed his life as well as the beautiful story of when President Erying first met his future wife. Read the full article here.

Since early childhood, Hal’s deepest dreams were to be married and form a family. He thought about his future children so often that he’d already given them the collective nickname “The Redheads,” imagining them with red hair like his mother’s.

This dream finally moved toward fruition during his service as a counselor in the Boston District presidency, a Church calling Hal had while he was pursuing his graduate work at Harvard University following his undergraduate studies at the University of Utah. As a doctoral student in the summer of 1960, Hal represented the district presidency at a single-adult devotional held at the Cathedral of the Pines in southwest New Hampshire, USA, a natural outdoor amphitheater of note in the region. At the event he saw a young woman in a red and white dress and was impressed by the pure goodness she radiated. He thought, “That’s the best person I’ve ever seen. If I could be with her for the rest of my life, I could be every good thing I ever wanted to be.”

The young woman was Kathleen Johnson from Palo Alto, California, USA, who hadn’t intended to be in New England that summer but, at the insistence of her friend, had attended summer school with her at Harvard. Following that outdoor devotional, Hal arranged to meet Kathy at church one Sunday and was happy to hear she enjoyed playing tennis. Hal had been playing tennis several times a week with a college friend and was a good natural athlete, so he assumed a game of tennis would be an ideal first date and a way for him to make a terrific impression. What Kathleen didn’t tell him was that she had been the captain of her high school tennis team! “She cleaned me out,” Hal still grumbles about the match. This was the first of his future wife’s remarkable examples of living humbly and then helping her husband to do so.