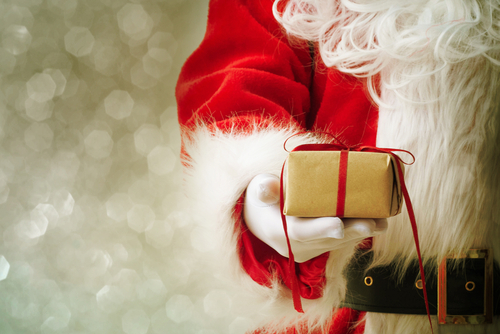 Santa Claus is, perhaps unfortunately, the most recognizable character during the Christmas season. But did you know that for all that he commercially represents, Santa Claus is surprisingly rooted in ancient Christianity?

Santa Claus was born in AD 270 in the town of Patara on the Mediterranean coast of southwest Turkey. His real name was Nikolas, a Greek word that fittingly means “victor of the people” or “people’s champion.” He lived most of his adult life in the nearby city of Myra (which is nowhere near the North Pole!).

► You'll also like: "What Prophets Have Said About Santa Claus"

According to stories handed down over generations, his parents died when he was young and left him a considerable fortune. He used this vast wealth to secretly do good deeds, such as the time when he threw a bag of gold into the home of poor family to save the daughters from a destitute life on the streets. One version of this story suggests that the gold landed in a stocking hanging by the fireplace to dry, leading to our Christmas tradition of hanging stockings. Because of his ongoing and overwhelming generosity, Nikolas’s reputation for quietly and anonymously doing good eventually could no longer be kept a secret and he became revered by all those who knew him as someone deeply devoted to God—a fact manifest in his acts of service to others.

He was consecrated as the Christian bishop of Myra around AD 311. In AD 325, Constantine the Great summoned him to join the Council of Nicaea. At the conclusion of the council, Nikolas signed his name to the famous Nicene Creed, which established core theological tenets of Christianity.

After he died in AD 343, the stories of Nikolas grew and expanded to include miracles and great deeds. Stories were told of Nikolas bringing children back to life and of saving sailors on a storm-tossed ship. These stories led to his canonization as a Christian Saint: Saint Nikolas.

How did this honorable Christian bishop become the Santa Claus of today?

As part of the yearly festivities that began being held to honor his memory (celebrated on his death date of December 6), children would leave gift offerings. In the morning, the children would wake up to discover treats in the place of the gifts they had left.

► You'll also like: "Poll: Do You Tell Your Kids About Santa Claus"

The Dutch brought Saint Nikolas traditions to the Americas when they settled New Amsterdam (now New York) in 1624. The Dutch called him Sint Herr Nikolass, which soon morphed into Sinterklass and then Santa Claus by the 18th century.

Now, millions of children recognize Santa Claus as the kindly old man who shares gifts with children, not so far from the truth of Saint Nikolas’s own life.

Over the centuries Saint Nikolas remained beloved and patronized; he is still a popular and influential saint throughout regions of the world deeply influenced by eastern Orthodox Christianity. And though the memory of Saint Nikolas has been co-opted by commercial concerns today in the west, much of the non-western Christian world still remembers this faithful saint who, as a rich young ruler, gave away all that he had to follow Jesus (see Matthew 19:16-24).