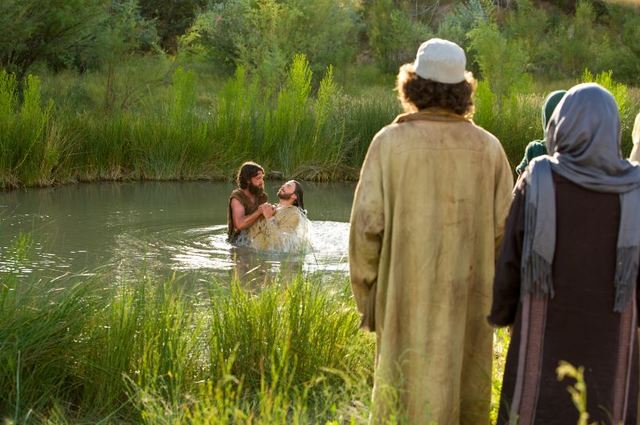 The Symbolism Behind Where Jesus Was Baptized (+ Insights from President Nelson)

President Russell M. Nelson often teaches powerfully and poetically about the symbolism found in the scriptures, the temple, and the life and Atonement of our Savior Jesus Christ. In Teachings of Russell M. Nelson, we find many insights about the significance of Jesus Christ's baptism that can help us with our Come, Follow Me study this week.

"The River Jordan was the site Jesus chose for His baptism by John to 'fulfil all righteousness' (Matthew 3:15; 2 Nephi 31:5–6). Is it significant that this sacred ordinance was performed in virtually the lowest body of fresh water on the planet? Could He have selected a lower place to symbolize the humble depths to which He went and from which He rose? By example, He wanted to teach us that He literally descended beneath all things to rise above all things. Surely this would signify that through our obedience and effort we, too, can come from our deepest depths to ascend to lofty heights of our own destiny." (“Why Palestine?” Missionary Training Center, October 11, 1994)

As scriptural scholar Taylor Halverson further points out: "'Jordan' is a Hebrew word that means 'to go down.' A related word/name is Jared. . . . Keeping in mind the meaning of the word 'Jordan', we can see so much beauty, significance, and symbolism all pointing to why Jesus chose to be baptized at the Jordan."

The exact location of Jesus Christ's baptism varies in the Gospels and the Book of Mormon. But Richard Neitzel Holzapfel and Thomas A. Wayment explain in Making Sense of the New Testament:

“According to John, the place where these events occurred was in ‘Bethabara’ (John 1:28), a place name which is confirmed in the Book of Mormon (1 Nephi 10:9). Most ancient Greek manuscripts of the Gospel of John, however, place the events in Bethany instead of Bethabara. Some critics have seen in this an opportunity to criticize the Book of Mormon for using a less known and attested version of the story. The fallacy with this criticism is that a city or place named Bethany ‘beyond Jordan’ is otherwise unattested, whereas Bethabara, ‘the crossing,’ is mentioned in the Talmud” (Holzapfel and Wayment, Making Sense of the New Testament, 28).

The location of Christ's birth and the name Bethabara—"the crossing" or "house of the crossing"—deepen in meaning when we consider another significant biblical event that occurred on the River Jordan. While near the River Jordan, the prophet Joshua told the Israelites, "Sanctify yourselves: for to morrow the Lord will do wonders among you" (Joshua 3:5). That following morning, Joshua—whose name translates to Jesus in Greek—instructed the people:

"Behold, the ark of the covenant of the Lord of all the earth passeth over before you into Jordan. Now therefore take you twelve men out of the tribes of Israel, out of every tribe a man.

"And it shall come to pass, as soon as the soles of the feet of the priests that bear the ark of the Lord, the Lord of all the earth, shall rest in the waters of Jordan, that the waters of Jordan shall be cut off from the waters that come down from above; and they shall stand upon an heap" (Joshua 3:11-13).

It wasn't until the Israelites' feet were wet—when they took that first step of faith—that the Lord parted the waters and made their passage possible. The Lord continues to work miracles among us today, and when we step forward with faith and believe on His name, He will part the waters of chaos, death, hell, and pain and make a way possible for our future progression.

It was here, where Jehovah parted the waters for His chosen people, that Jesus Christ condescended to be baptized and begin a ministry that would culminate in the Atonement—the ultimate path to eternal life or crossing into a new, sanctified life.

"Could it be that Christ chose this location for His baptism in the River Jordan as a silent commemoration of the crossing of the faithful Israelites under Joshua’s direction so many years before (see Josh. 3), as well as a symbol that baptism is a spiritual crossing into the kingdom of God?" (“In This Holy Land,” Ensign, February 1992).

It's no wonder President Nelson has called on us to "study Jesus’s life as our exemplar." He continues:

"He came into the world to show us a better way. . . . Now, we know that perfection won’t come to us in this life, but every day we can strive to follow Jesus’s example: the way we love, the way we focus on ordinances, baptism, sacrament, endowments, sealings, temple marriage. He focused on ordinances. He taught us by His example the importance of baptism and participation in the sacrament" (Louisville Kentucky Temple Dedication, session one, March 19, 2000).

Learn more about the baptism of Jesus Christ in this video by Book of Mormon Central: