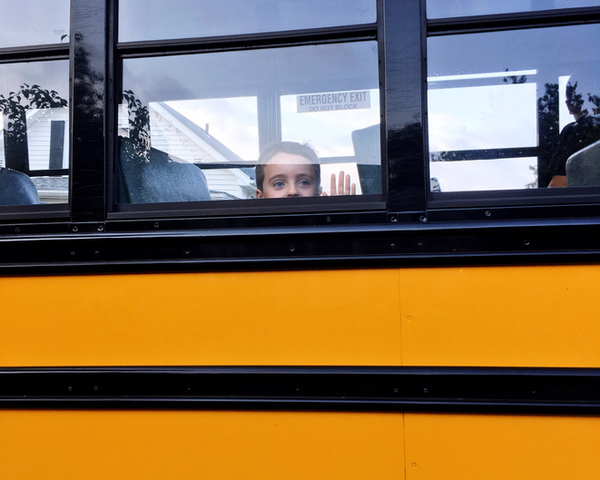 Here are just a few of the things I enjoyed as a child more than riding the bus.

Trips to the dentist.

Trips to the dentist for a root canal without the use of anesthesia.

Trips to someone who says he’s a dentist, but whose degree came from an online dental school based in a country you’ve never heard of.

(In case you missed it, I really hated riding the bus.)

During most of my bus-riding years, my family lived in a quiet country several miles outside of Charlottesville, Virginia. My elementary and high schools were in town, but my middle school sat 15 miles away, situated well in the hills of rural Albemarle County.

This meant the bus had already rolled through the suburbs and picked up nearly everyone who would ride our route to Leslie H. Walton Middle School.

Unfortunately, I was usually the last to board. And by the time the bus reached the bottom of my long gravel driveway, there were only a couple of seats left. Finding one amid the cruel snickers of 6th, 7th, and 8th graders felt like a warped game of “Where’s Waldo?”

My wobbly, knobby knees carried me up the steps and I knew that if I didn’t find the open seat quickly, the bus driver would snap at me and only deepen the embarrassment. Sometimes a seat that appeared to be open would suddenly fill when I tried to sit. Like pieces on a chessboard, the movement would create an opening elsewhere, but by the time I noticed it and made a move, that seat became mysteriously occupied, too.

One gorgeous spring morning as I waited anxiously for the bus to arrive, I decided that I’d simply had enough. It had been a particularly rough couple of days and the bus had become a laboratory of bullying and mockery for others and me.

I could not get on the bus that morning.

I would not get on the bus that morning.

With a burst of brilliant ingenuity, I scanned the trees that lined both sides of our driveway and spread deep into the surrounding forest and picked one on an angle about twenty yards from the edge of the road.

A few minutes later, the bus barreled down the road and stopped at the bottom of the driveway. I knew the driver was craning his long, wrinkled neck to see if I was awkwardly galloping toward him dragging my backpack and fussing with a trombone case bigger than I was.

Thinking I was nowhere in sight, the driver punched the gas and continued down the winding country road without me.

I slowly slunk out from behind the tree and stepped to the head of the driveway. I looked left, then right, then left, then right again. “Jason,” I said to myself, “you might be the smartest kid in the history of the world!”

I glided back up to the house and explained to my mother that—silly me—I somehow managed to miss the bus. It wasn’t the first time, of course, but it was the first time it had been deliberate. Mom called my father and he drove a fair distance from his office in downtown Charlottesville to pick me up and drive me into school.

After stopping by the office and handing over a note from my mother, the secretary gave me a late pass and shooed me on my way. As I moved down the hall, feeling smug that I’d successfully beaten the system, a kid from my bus passed me on his way to the library.

“Hey, Jason, what happened to you this morning?”

“No, I meant why were you hiding behind a tree in the woods?”

The new few minutes were a blurry haze. Somehow I managed to find my way to class, plop into a desk and imagine the misery that awaited me the next morning. I had practice after school and, mercifully, wouldn’t have to ride the bus home.

I didn’t sleep well that night. Or, at all.

The next morning I got ready, had what I assumed would be my final meal, and took the long walk down death row to the bottom of the driveway.

It was the longest wait of my life.

Eventually, the bus appeared, came to a stop at my feet and the door squeaked opened. I took a long breath and climbed the three steps to face the music. I stared down that narrow aisle that separated the rows of cracked, green vinyl seats and prayed for a miracle.

His name was Roy.

The tall, athletic and popular African-American kid was a couple of years older than I and never seemed to sit in the same seat twice. He didn’t have to. He could sit anywhere he wanted. He probably could’ve driven the bus if he’d asked.

To my surprise, Roy called me by name and slapped his hand against the empty seat next to him. I looked to my left and right for hidden cameras and straight over my head for a giant bucket of sticky green goop.

I sat down next to him and wondered what was next. A lecture? An insult? A riddle where I’d become the punch line?

Instead, Roy asked me what kind of music I liked. I answered and he followed with another question, then another and another and another. After a few minutes, he began to answer the same questions himself. What he didn’t talk about was the incident just 24 hours earlier.

I wished we could have taken the long way to school, and by the time we arrived I no longer wished to be invisible.

Roy had seen me.

The next morning I stepped onto the bus convinced that it had been a one-time act of charity, some sort of strange nerd outreach project.

Roy again slapped the seat and gave me a nod. We talked the entire ride into school and I don’t think I’d ever sat so tall on a school bus.

This went on another few days until the morning I boarded the bus and Roy was nowhere to be seen. I panicked and fear hit me like a tidal wave.

Just then, another young man called my name slapped an empty seat next to him. I sat and made a new friend. That day grew into another, then another, and no longer did I fear that daily journey. No one else seemed to either.

Roy had been an eighth-grader and by the time I got to high school, I heard his family had moved. But if he walked passed me today on a crowded sidewalk, I would immediately recognize his face.

I’ve often considered how Roy might have addressed the problem on our bus if we’d been part of some after-school special or made-for-television movie.

He might have asked the bus driver to stop a hundred yards before my driveway.

He might have jumped onto the front seat and turned to address his classmates.

With inspirational music swelling in the background, he would have raised his hands and shouted, “My friends! This must end today! Why are we doing this? We should be kinder to one another. We should accept one another and be friends! Change starts with us!”

All of the students would slowly begin to clap until all were cheering Roy’s efforts to heal the bus. Roy would smile humbly, wave them off and take his seat.

Then he might tap the driver on the shoulder and give him a wink to roll on toward that boy waiting in the distance.

Roy did none of those things.

Perhaps recognizing his unofficial role as a popular and likable leader, he led by example.

No teachers involved, no reports filed, no lengthy conferences or interventions. Just a simple act of kindness.

It was a moment that had been noticed, consciously or not, then repeated by others.

I can’t say if anyone else’s life was changed that day, but I do know that I’m different today because of him.

One example of kindness.

Sometimes I like to think back to that boy hiding behind a tree in the woods. I think there might be a little bit of him in all of us. It seems everyone has those rough days they either feel invisible or wish they could be.

But I also think there’s a little bit of Roy in all of us, too. It’s that quiet willingness to say, “Hey, I’ve got room for you. Come sit.”

I bet there is someone in your world and mine who needs us to see them today. They need us to wake our inner Roy and pat that empty seat next to us.

Let’s get on that bus.

Mormon Life BullyingBullying,Mormon Life
Comments and feedback can be sent to feedback@ldsliving.com