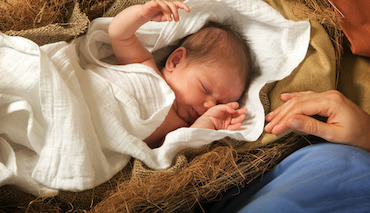 Several of the titles given to the Savior are obvious, and to those who accept the scriptural description of Jesus’s birth, Son may be the most obvious of all. It is the belief of the faithful that this baby boy born in Bethlehem was the son of Mary, a mortal woman more highly favored by that role than any mother could possibly be favored in any other way. But more singular than the motherhood of a mortal woman was the fatherhood of an immortal, divine, glorified Man—Elohim, God the Eternal Father, the Man of Holiness. In the New Testament Gospels alone, as written by Matthew, Mark, Luke, and John, the title “the Son of Man” appears eighty-three times. Furthermore, throughout all scripture this title for Jesus is by far the most common. “Son of God,” used less often but sometimes with more impact, was so sacrosanct that His claim of that relationship was used against Jesus in the people’s condemnation of Him as a blasphemer.

Inasmuch as the Savior’s humility is one of the most inspiring aspects of His character, always deferring to His Father’s counsel and always obedient to His Father’s will, it would seem that the title Son perfectly captures both the deference and the dignity that characterized Jesus all of His mortal life. Surely no higher tribute could possibly be paid than to have this Father repeatedly say of this Offspring, “This is my beloved Son, in whom I am well pleased; hear ye him” (Matthew 17:5).

Some of the specific roles as Son that Jesus played are:

Son of God Most High

Son of the Blessed

Son of the Eternal Father

Son of the Highest

Son of the Living God

Son of Thy Bosom

In this beautiful book, Elder Holland shares his notes and insights about the many names of Christ he has studied in his twenty-five plus years as an Apostle. He promises that "as we study these titles to learn more about who He was and is, we will find ourselves learning more about who we are and what we may become." In doing so, we will gain a greater understanding of our covenants and how each of us can more fully bear witness of Christ's holy name.Available now at Deseret Book stores and DeseretBook.com.