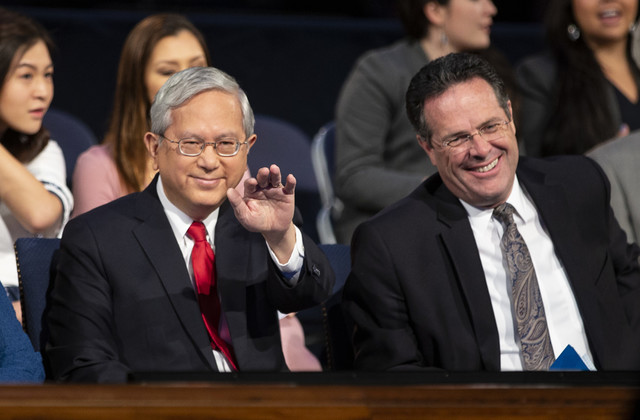 The Unexpected Moment That Taught Elder Gong the Eternal Importance of Learning: "You Want to Know How My Son Died, Don't You?"

“For me, looking backward from the future is a remembrance of things to come,” Elder Gong said. “It is an invitation to prepare now for a future that will be here tomorrow."

During a recent flight from Salt Lake City to New York City, Elder Gerrit W. Gong of the Quorum of the Twelve Apostles had a last-minute seat assignment change.

“In this case, perhaps not without purpose,” he recalled during a campus devotional at Brigham Young University on Oct. 16.

When he asked his new seat companion whether she was traveling to New York or the plane’s final destination of Milan, Italy, their conversation began to take off.

The woman had spent her life as a bilingual, bicultural Italian-English translator, and the two began to talk about Italian art and culture.

“As she queried me about Michelangelo, I remembered a BYU humanities class with Professor Todd Britsch,” Elder Gong said. “I was able to say that in Michelangelo’s statue the Pieta, the same piece of Carrara marble feels alive and lifeless at the same time.”

The woman sitting next to him agreed, and they began to talk about the Sistine Chapel — then Dante, and Shakespeare.

“Then something unexpected happened," he said. "Seemingly out of the blue, this good woman quietly asked, ‘You want to know how my son died, don’t you?’”