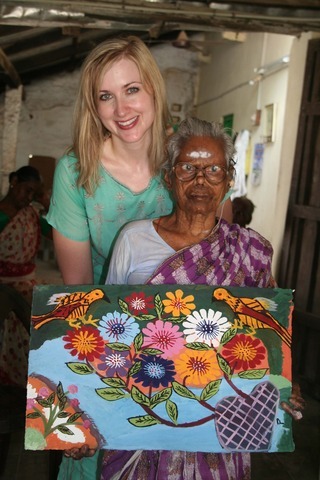 In India, those suffering from leprosy are considered to be “untouchables.” Believed to be cursed by God, they have been cast out of society to live on the outskirts of civilization, where they beg on the streets for survival. Even their shadows are believed to be cursed. (To learn more, click here to read "The Untouchables: Part 1.") But strides are being made to fight the cultural stigma associated with the disease and to help leprosy victims heal both physically and emotionally.

As we rode in the Rising Star Outreach mobile medical van along the dilapidated and dusty roads of Chingleput, India, Dr. Senthil Kumar, who travels to various leprosy colonies to provide medical care, explained the cultural stigma that compounds the physical suffering caused by the disease.

"Leprosy has been around for more than three thousand years, and it has always been considered a curse," he said at the time. "Many believe it is a punishment from God, that if a person has leprosy, they are evil."

He continued, "In the past, when someone contracted the disease, the only option was to send that person out of the house. That way, at least the other family members would have a chance for education and a normal life."

Healing Wounds The first scene I observed at Chettipunniyam leprosy colony was overpowering. Piles of garbage lined the rows of tiny mud shacks, and goats, chickens, cats, and dogs roamed freely. The unsanitary conditions and poor diet have created an environment in which it is extremely difficult for residents to stay healthy.

The day I visited, many volunteers had accompanied the doctor in hopes of helping to clean victims' wounds. They quickly spread the word that the doctor was there, then they filled basins with water, donned latex gloves, and began carefully washing the hands and feet of leprosy patients. The sight of deformities and gaping wounds was overwhelming at first - but so was the love and tenderness shown by the volunteers as they knelt down and freely touched these "untouchables." With the help of nurses, volunteers removed old bandages, washed wounds, carefully scraped away dead tissue, and applied ointment and clean bandages. Dr. Kumar then screened patients for diabetes, hypertension, and tuberculosis.

"Leprosy causes nerve damage, so people lose feeling in their extremities and often injure themselves," Kumar explains. "They don't know how hot the coffee is they're holding, or if they're walking with a nail in their foot. They get skin ulcers, which get infected, and the hands claw and become paralyzed. The wound care is so terrible that we have to remove hands and feet and legs." He also explains how vermin, including maggots and rats, will remain unnoticed as they consume the tissue of leprosy victims.

Kumar says most of the time leprosy victims use old bandages simply to cover their wounds, not to keep them clean, so their sores don't heal. "The sores are sometimes there for ten or twenty years," he says. According to Church member Becky Douglas, who founded Rising Star Outreach, that's why they began to teach self wound care. "As soon as we put the responsibility on them, wounds began to heal much more quickly than when we were coming around once or twice a month. The difference has been unbelievable."

Rebuilding Lives Despite the physical suffering, Kumar insists, "it's not the disease that kills them, but . . . the stigma that is killing the people here. Leprosy doesn't kill all at once, but it kills the self-esteem, the family life, the social status, chances of education, and chances of being a respectable person in society." (Dr. Kumar himself is unable to open a private practice because he works with untouchables. When people find out he treats leprosy victims, they refuse to come to him.)

In the past, street begging seemed like the only way leprosy victims could survive. But thanks to Rising Star Outreach and their partnership with Padma Venkataraman, a well-known activist and daughter of a former Indian president, thousands of leprosy victims who were once beggars have been able to receive micro loans to build their own businesses. I saw these businesses at the Bharatapuram leprosy colony in southern India, businesses that included a sewing business, a barber shop, a snack shop, and a carpentry business (which remarkably employs colonists as well as people from the surrounding village).

"When you beg on the streets, the worse you look the more money you make. It makes leprosy victims want to be the worst they can be," says Douglas. "But when they start their micro businesses, they begin cleaning themselves up. They have transformed themselves both inside and outside, and have regained their self respect."

Thriving businesses make Bharatapuram unique, but the jewel of this colony is the Bindu Art School - a place where leprosy patients learn to express their creativity through painting. Launched in 2005 by Austrian artist Werner Dornik and Padma Venkataraman, students here learn to paint despite their deformities, sometimes taping paintbrushes to their fists.

"At first, they only had two colors to use - blue and black. Those colors, combined with the mood of the patients, led to pretty depressing art," says Douglas. "But as the painters began to get access to more colors, and as they healed through self expression, the art became more joyous."

"Joyous" is a good description. After spending some time with the artists, I found all of their work to be colorful, often whimsical. Some painted nature scenes, while other pieces were abstract. Some paintings were sophisticated, some were elementary, but all had a great energy about them. (I couldn't resist buying a painting of my own.) In fact, the artists here are gaining worldwide recognition; their work has been shown in the galleries of cities like London, Berlin, and New Delhi.

The Bharatapuram colony was a fascinating example of how leprosy victims are healing emotionally and rebuilding their lives. But perhaps the most touching example of resiliency I found was in the tiny colony of Mugalvadi.

The few residents who live here were friendly and welcoming, and upon our arrival we were immediately donned with bindis (the ornamental dots worn on the forehead). The colonists, who were all elderly, were eager to communicate through hand gestures and a few English words.

With the help of Dr. Kumar, who translated between Tamil and English, I was able to hear the moving stories of these colonists. For example, Krishnan, who has lost all his fingers and one leg, contracted leprosy when he was 15 years old and was forced to leave home. His wife, Saroja, was just 9 years old when she and her father contracted the disease. They survived as beggars near a temple in Chennai. Saroja's father met Krishnan at a leprosy treatment facility and wanted him to marry Saroja. The couple has been married for 40 years, living in Mugalvadi since 1972.

As the volunteers visited with the colonists, Dr. Kumar took me behind the living quarters to show me something quite remarkable. Saroja, who has lost a leg to leprosy, along with many fingers and toes, had set up a birdbath and bird feeder.

"It takes her more than an hour to drag herself over to the well and fill bowls with water for the birds," he explains. "She then scoots herself and the bowls back behind the homes."

The residents here do not have enough to eat. In fact, we brought a 50-pound bag of rice with us to supplement the meager amount of food they receive from the government. Yet, Kumar says, Saroja takes some of her rice and lovingly grinds it up to feed the birds.

"It is her way of sharing," he says. "Though she needs so much help herself, she still finds a way to give to someone else."

After visiting these colonies, it is clear to me that leprosy victims have talents and stories and love that they crave to share. And now, in a variety of ways, they are finding the opportunities to do so.