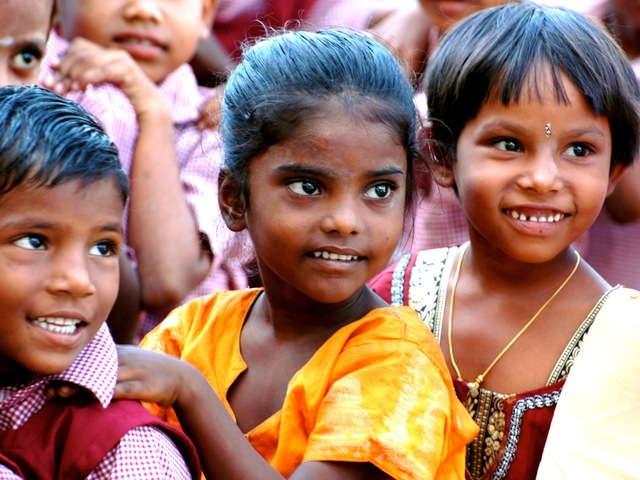 Click here to watch a video on Jamie Lawson's experience in India at the leprosy colony.

In case you missed them, here are The Untouchables: Part I and Part II.

Evil. Cursed. Untouchable. In India, leprosy victims are despised, shunned from society. Tragically, so are their children—even if they don’t suffer from the disease. These children are most often destined to beg on the streets and live in the filthy conditions of the leprosy colonies which, when combined with their genetic predisposition for contracting the disease, puts them at great risk of continuing a horrific cycle of suffering for another generation. But Becky Douglas, founder of Rising Star Outreach, is striving to give them much brighter futures through unprecedented educational opportunities.

I recently visited Douglas at Rising Star Outreach in Chingleput, India. As soon as I arrived, I was greeted by half a dozen children in crisp, cotton school uniforms. “Auntie! Auntie! What’s your name?” One young girl with short black hair and large dark eyes eagerly grasped my hand. Another small girl touched my hair, fascinated by its blonde color. They asked me questions, taking the opportunity to practice their English, and happily told me about themselves as we walked to the nearby playground where dozens more children were playing basketball, swinging, and climbing on the monkey bars. These children, or “colony kids,” as they are often called, live and study at Rising Star Outreach as part of the charity’s mission to help leprosy victims and their families create better lives for themselves.

“When we first opened the school, we only had room for twenty kids,” Douglas recalls. “People came from all over India, having heard about the school through the grapevine on the streets. The demand was so great that we ended up squeezing in twenty-six kids.”

Arun was one of those twenty-six kids. When his father heard about the school, the two traveled more than 1,000 miles from their leprosy colony in New Delhi in hopes of securing a spot for the boy. “We were already full, so we put him on a waiting list,” Douglas recalls. “A couple of days later, we were out doing some volunteer work in the colonies, and there was Arun, alone, crying in the dirt. His father had left him at the colony so he could go begging. He didn’t have enough money to bring him back to New Delhi. This father went to such great lengths to give his son a better life, so we took him in.”

While there are many parents who are willing to make such a sacrifice, Douglas says that many others have to be convinced to send their children to school and forfeit the income they would bring in as beggars. It’s something Douglas handles with great sensitivity while explaining the opportunities their children would have to learn English and computer skills—two things that will help secure employment with international companies in the future. (Despite having such skills, Indian companies would not hire them because they are “untouchables”—a stigma the children could carry throughout their lives.)

“If you don’t respect their culture, you’ll never win their hearts,” Douglas says. “We realize it’s a huge sacrifice to send a child to our school.”

And sometimes parents decide they can’t spare their children after all. For example, five-year-old Santos and his older sister, Amal, both came to Rising Star, where they lived and studied for about three years. But when their father lost his leg to leprosy, he withdrew them from the school so they could take care of him and return to begging on the streets.

Most of the children at Rising Star Outreach come from tragic circumstances. Douglas says that earlier this year, two brothers, Anutha and Aravine, were brought to Rising Star from a nearby leprosy colony after their father doused their mother with oil and lit her on fire. “She died, but both boys had burns on their hands from trying to save her.”

Twelve-year-old Satya came to Rising Star years ago, after her father died from the effects of leprosy. Her mother was mentally ill and had been placed in an institution, so when her father passed away, there was no one willing to care for her. “Her uncle said he didn’t want to be burdened by a worthless girl,” Douglas recalls. “We were so full—the kids were practically sleeping on top of each other.” But at the request of well-known social activist Padma Venkataraman, Douglas made room for Satya. “That first day, I held her in my arms the whole day, and she just sobbed.”

Because of the emotional distress the children have suffered, Douglas keeps a full-time counselor on staff. “We want to help them heal and get them talking,” she says. “We know we’re not the answer to every problem, but we do what we can.”

Over the years the school has expanded, and today there are about 200 children at Rising Star Outreach. Even so, Douglas says, “We will never have enough places for kids. Our goal is to take one or two from a family, hoping that as those two children succeed, they will raise the level of hope for everyone else.”

The school has become so successful that Douglas has reserved 20 percent of the slots for children from the nearby village. “At first, everyone laughed at us. They said no one from the village would send their child to school with a bunch of untouchables. But because of our top-notch program, the spots filled quickly, and now there is a long waiting list.”

Douglas hopes that by integrating the children, the stigma of leprosy will eventually disappear in India. “We have to start with this generation,” she says. “Sometimes one small thing can have massive repercussions in society. These children will eventually change the stigma that has existed for millennia. They are already starting to think for themselves and find their place in the world.”

To sponsor a child at Rising Star Outreach, or to find out how you can help in other ways, visit risingstaroutreach.org.