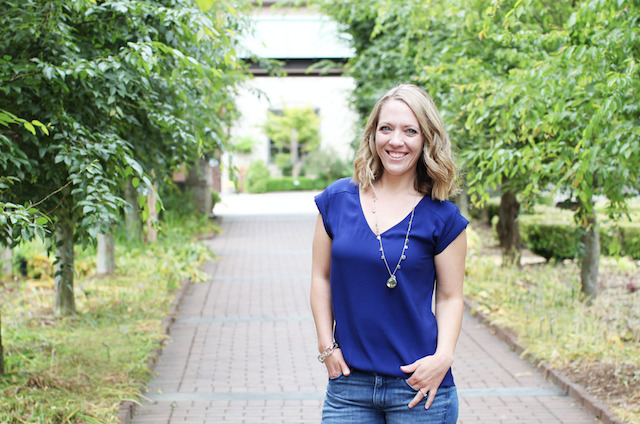 "Oh no, please don't let that be our coach," Audra thought as she watched a man walk through the parking lot.

But the man kept walking toward the children on the soccer field until Audra could see the reason for her "oh no” in all its glory.

"He was decked out head to toe in BYU attire," Audra says in an episode of This Is the Gospel. "And while this might not seem strange, what you need to know is I live in North Carolina. . . . If you're not a member of Church, you don't know what BYU blue is. But I did. And so I knew immediately that he was a member of the Church. So right then and there, I made the decision that I was going to stay as far away from this coach as I could."

Little did Audra know how this coach and other members she would meet would help bring her back to the gospel.

Audra grew up as a member of the Church and knew BYU blue well because it was while attending BYU that she met her husband. The two had married in the temple, and it seemed like attending Church activities and participating in Church callings was “just how life went," Audra says.

But as Audra and her husband began growing their family and their careers, Audra says the trials began to mount. Her husband’s job required their family to move often, and they never stayed anywhere for longer than 18 months. During this time of constant upheaval, Audra found herself grappling with trials she had never seen other Church members openly struggle with all at once, trials like infertility, loss, loneliness, depression, anxiety, and moving before anywhere really began to feel like home.

“At one point I sank into a really deep depression and suffered really badly from anxiety,” Audra shares. "My body kind of went into a fight-or-flight mode where I just really struggled to even get out of bed and make sure that my kids were getting fed each day."

During this time of intense trials, Audra also began struggling with some Church doctrine and cultural issues. She says that in her early years she didn't take the time to really think about what she believed or how she felt about these things. But without family nearby and the constant moving making it difficult to make close friends, Audra was spending a lot of time by herself. There was no one she felt she talk about these questions with, no support for her search for answers.

In the wake of all this turmoil, combined with the weight of depression and yet another move, Audra made a decision: She was going to walk away from the Church.

"I didn't want to do it anymore and I wasn't interested in staying to fight for answers," Audra says. "I had no plans to come back. I stayed that way for five years."

A few years after this decision, Audra and her family moved to North Carolina. But this move was different. This time, Audra says she kept having the thought that she needed to put down roots. She needed for this new place to feel like home.

And so Audra volunteered her children’s elementary school as a part of the PTO board. As time went on, she began emailing back and forth with a woman from the PTO. And after finding out they shared a mutual friend on Facebook who attended BYU, Audra realized her new friend was a member of the Church.

But when the topic of being a member came up, Audra kindly told this woman that she was not an active member and had no desire to participate in the Church. "And she said, 'Oh, okay, that's fine. I'd still love to meet up with you and get to know you sometime. But if you ever are interested, here's where the building is and this is what time we meet.'"

The chances of meeting and befriending a Latter-day Saint in that area were not high, and Audra felt confident that that would be the extent of her unexpected encounters with members.

But less than three weeks later, Audra found that one of the women in her group fitness class was a Latter-day Saint. Again, she kindly but firmly told this woman that she wasn't interested in participating in the Church.

Around this time, Audra also noticed the soccer coach for her child's soccer team was a member and avid BYU fan.

These unusual encounters in such a short time made an impression on Audra and led to an experience she says she will never forget.

On her way back home from dropping her kids off at school, Audra had the thought that maybe she should try attending church again. Immediately, she found herself fighting against the idea. But at that moment, she felt an overwhelming push to return to the Church.

"The Lord showed up in the passenger seat of my car that day and it was like he was grabbing me by the shoulders and looking me straight in the eyes and saying, 'Just trust me. Do it. Just trust me,'" Audra says.

Audra could not deny the intensity of this experience, and she wrote an email to her friend from the PTO board telling her that she wanted to attend church the next Sunday. But, while excited Audra was going to go to church again for the first time in five years, this friend replied that she would not be there that Sunday.

For a moment, Audra thought she was off the hook. No one would be at the sacrament meeting to hold her accountable if she didn't show, so why should she go?

But she pushed that thought away and that Sunday, "I walked back through the chapel doors for the first time in five years."

Nothing spectacular happened. No angels were singing. In fact, Audra says she felt a little nauseous sitting in the pews again after so long. As sacrament meeting started, Audra turned to her kids to let them know that once the closing hymn began, they would leave before anyone could talk with them.

However, that's not what happened. Audra and her family stayed. As it turned out, the soccer coach was the bishop of Audra's ward and the PTO mom was his wife. Knowing that Audra would be at church that Sunday, they sent specific people to welcome Audra and her family to church.

"I had more people in that one hour after sacrament meeting say "hi" to me and sit with me and talk to me than I had the whole previous year that we had been living in this location," Audra says.

As Audra thinks back on this experience, she says she can see what the Lord did for her during her time of loneliness and constant moving.

"He said, 'Don't you see what I did?' You wanted to be home, and I brought you home. These people, this ward, they can be your family. You can put down roots here, and you can be home. This is it.' And I am so thankful that the Lord knew where to find me. That He knew He could send someone to a soccer field wearing BYU attire. He knew that he could send someone to my fitness classes. And he could show up in the passenger seat of my car because that's where I was, and He came to me."

Audra says that since this time, she has not only felt more at home at church but she has felt more at peace within the walls of her own home. "I know that He has brought me to this place and I am exactly where He needs me to be right now," she says.

Listen to the full podcast episode of "There's No Place Like Home" below or read the transcript and view show notes here.

Mormon Life Gospel HomeGospel,Home,Mormon Life
Comments and feedback can be sent to feedback@ldsliving.com