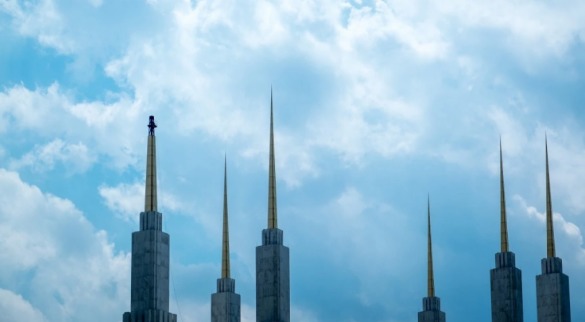 The Washington Post: At the Mormon Temple, a Golden Angel Comes Down to Earth

After nearly 50 years of standing proudly above the Washington D.C. Temple, the angel Moroni has been removed from its crowning spot above the temple's six spires to undergo much-needed restoration.

Reaching 288 feet in the air, this angel Moroni sits on the tallest LDS temple in the world and is one of only five angel Moroni statues to hold gold plates. (The other angel Moronis with gold plates are placed atop the Los Angeles California, Jordan River Utah, Seattle Washington, and Mexico City Mexico Temples).

The Washington Post recently covered this event, describing the history of this unique statue as well as how well it has held up over the years:

"This is the first time the 18-foot-tall Moroni has come down since he was put in place before the temple’s dedication in 1974," John Kelly from The Washington Post writes. "The statue had lost some of its luster and suffered from corrosion, said John Fowler, director of the Washington, D.C. Temple Visitors’ Center, although he added: 'It’s amazing to me it did as well as it did.'"

After explaining the intensive process of removing the statue from its rusted perch, Kelly explains the process of restoration as well as the story of how it came to be.

Originally, the Washington D.C. temple was not designed with the intention of having an angel Moroni. However, Avard T. Fairbanks was chosen to sculpt the statue that was to top architect Keith W. Wilcox's design.

But when Wilcox traveled to Italy to see the sculpture in its final design stages, he "took one look and said he didn’t like it," Kelly shares.

Wilcox, a trombone player, thought the angel blowing his horn didn't look accurate. "I told him that to me the angel Moroni looked as if he were ‘drinking’ from his horn rather than ‘blowing’ it," Wilcox wrote, according to The Washington Post. It was then Fairbanks asked Wilcox to act as a model for the statue.

Read more about this fascinating story at The Washington Post.