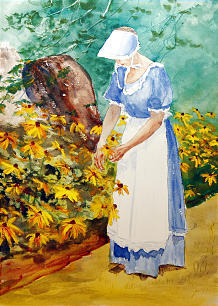 With its many attractions, displays, products, goods and services, Deseret Book's flagship store in downtown Salt Lake City has become a destination venue in and of itself. Among its many offerings, it provides entertainment, enlightenment and tasty treats.

One of its current attractions is a display of artwork by Elder Richard G. Scott of the Quorum of the Twelve.

The display materialized after Sheri Dew, President and CEO of Deseret Book, was in Elder Scott's office one day and saw some of his artwork.

"Not only are his paintings beautiful but they are also a window into his life and his heart," she said. "In many respects, they're autobiographical and show some of the scenes and settings that have touched him enough to try to capture them on canvas."