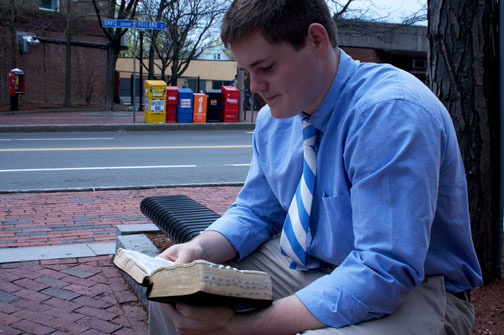 The long-awaited mission of Atticus Swett

Atticus Swett is sitting on a bench on a beautiful Easter Sunday, squinting at the blinding sun as he waits to begin the journey that, by now, has become so familiar. Wearing a jean-colored dress shirt split down the middle by a carefully knotted striped tie that occasionally sways in the cool April breeze, he ponders the future.

In a few moments, the freshman will travel the road that he's traveled so many times in his first year at Tufts, a trip that commences with a short shuttle ride from the Mayer Campus Center to Davis Square and concludes when he arrives at the simple red-and-white brick building a few blocks from Kendall Square.

In a few months, however, the freshman will embark on a mission of unfamiliar sorts, the destination of which is still unknown. He will depart from a burgeoning career as a linebacker for the football team and a thrower for the track and field team, not to mention the fast friends developed during his first year at Tufts, to answer a call.
Read the rest of this story at tuftsdaily.com