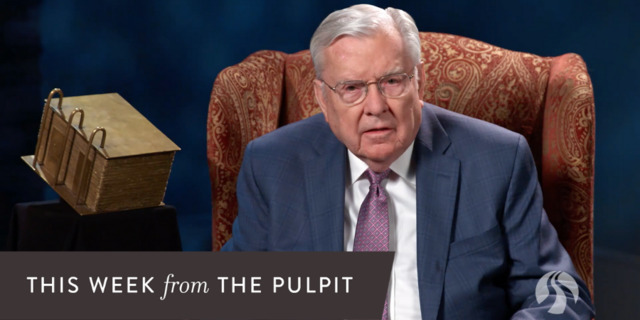 The seemingly impossible, our imperfect offerings, and being spiritually minded among topics discussed by Church leaders this week

Editor’s note: “This week from the pulpit” highlights recent messages from General Authorities, General Officers, and leaders of the Church. This story may be updated throughout the week.

With general conference just over 50 days away, Latter-day Saints around the world are beginning to look forward to hearing from Church leaders once again. While General Authorities and General Officers are likely already preparing their remarks for the Conference Center Theater pulpit, they continue to provide inspiring messages through other venues like Church Educational System devotionals, podcasts, and social media posts.

Here’s a look at what they shared this week.

In this month’s BYU-Pathway Worldwide devotional, President M. Russell Ballard shares advice for students who worry they might not be able to succeed in their educational pursuits.

When I have had something to do that seemed impossible or difficult, I have found great comfort in what Nephi said to his father, Lehi, after being given a very difficult assignment—to obtain the record from Laban.

“I will go and do the things which the Lord hath commanded, for I know that the Lord giveth no commandments unto the children of men, save he shall prepare a way for them that they may accomplish the thing which he commandeth them” (1 Nephi 3:7).

Did you notice that Nephi testified that the Lord will prepare a way for you to accomplish all of His commandments? This includes His commandment to “seek learning” by study and faith (Doctrine and Covenants 88:118).

Watch more of President Ballard’s counsel in the video below or read a transcript of his address.

On this week’s episode of the Church News podcast, Sister Lisa L. Harkness and Sister Cristina B. Franco of the Primary General Presidency give listeners a sneak peek of the special Friend to Friend broadcast taking place on Saturday, February 20. This will be the first event of its kind for Primary children, though similar Face-to-Face events have been held for youth and young adults.

What makes this event unique though isn’t just the age group its being broadcast too. This broadcast will originate in three languages: English (including American Sign Language), Spanish, and Portuguese. President Joy D. Jones shares a message in the English broadcast. Sister Franco, a native Spanish speaker, participates in the Spanish broadcast. And Sister Harkness learned some Portuguese to share her message.

“Now, I know my offering will not be perfect. I know that my Portuguese is very, very elementary at best,” Sister Harkness said. “But through that meager offering, we surely hope that these children can feel their Heavenly Father’s love for them.”

In the episode, Sister Harkness shares how the Lord recognizes our willingness to try, even if our offering is imperfect. Listen to the full podcast episode or read a transcript at Church News.

Elder Teixeira speaks at BYU Devotional on being spiritually minded

Elder Jose A. Teixeira of the Presidency of the Seventy spoke at a Brigham Young University devotional on Tuesday, February 9. In his remarks he quoted the Apostle Paul, “To be spiritually minded is life and peace” (Romans 8:6), and explained how being spiritually minded can bring peace during our time, as reported by Church News.

“Choosing to be spiritually minded by living a life worthy of the Holy Ghost’s gentle persuasions will provide you guidance in your decisions and protection from both physical and spiritual danger,” Elder Teixeira said.

He explained ways we can live a spiritually minded life, like being in tune with Heavenly Father and the Savior, loving God, understanding the purpose of the sacrament, and more.

Read a full summary of Elder Teixeira's remarks at Church News or watch his devotional in the video below.

So … I was distracted driving into the parking garage at my office the other day. I looked over at a building to see...Posted by Michelle D. Craig on Monday, February 8, 2021