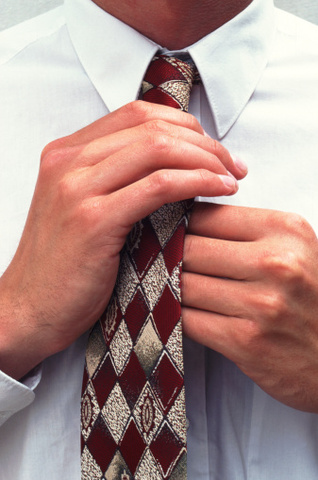 The strange connection between white shirts and LDS priesthood power

I became my ward’s high priest group leader last Sunday. After I was ordained, I started to give a lesson on John the Baptist. The same church leader who ordained me interrupted to tell me that from now on, he wanted to see me wearing white shirts. Other colors, including the black, long-sleeve button up I was wearing, were not tolerated.

I considered asking him if the same rules applied to John the Baptist almost 2,000 years ago, but that would have been snarky, and I do respect the man and his church position. Nevertheless, the edict reminds me of one of my favorite episodes of “The Simpsons,” where Homer undergoes aggressive questioning and a body cavity search after wearing a pink shirt to work. The Simpsons patriarch is eventually committed to an insane asylum after failing a sanity test.

A friend of mine opined that a black shirt worn by an active priesthood holder might signify individualism, or a less-than-sterling obesiance to authority. (I wonder if a white dress shirt is now required garb for all male journalists at The Deseret News?)

Leave a comment below or join the discussion on our Facebook page.
Read the rest of this story at standard.net