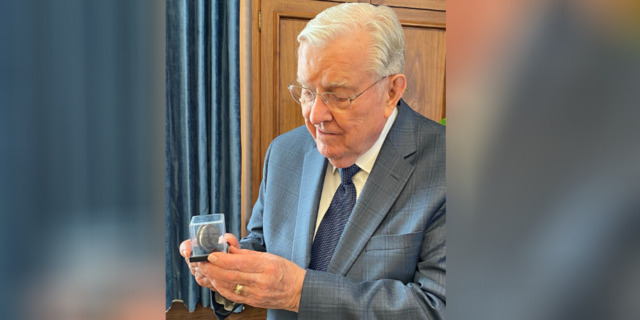 Some of the items in President M. Russell Ballard’s office might not surprise you. He has a photo of his late wife, Barbara, and the sculpted busts of three previous Church leaders he is related to by blood (Joseph Smith, Joseph F. Smith, and Hyrum Smith). What might surprise you is the Oreo cookie he keeps on his desk.

In a post on his Facebook page on Tuesday, January 12, 2021, President Ballard shared the significance of an Oreo that sits on his desk. He explained that several years ago while visiting a refugee camp in Greece he met, a nine-year-old boy, Amer, who had just recently made the “treacherous trip across the Aegean Sea” and had received some snacks from the volunteers there, including a roll of Oreo cookies.

In what was one of the most selfless acts I have ever experienced, this sweet boy offered me the first cookie. In fact, he refused to eat anything until I first took one. I couldn’t help but be profoundly touched by the selflessness of one so young who had so little.

Here he was, with nothing but the clothes on his back (which were still wet, I might add), and yet the first thing he thought to do was share a treat with a stranger. I now keep this cookie on my desk as a reminder to reach out to those who struggle around the world.

The Lord has made it clear that one of the great responsibilities of The Church of Jesus Christ of Latter-day Saints is that we are to feed the hungry and the poor. We are to reach out and take care of them. May God bless us all in our efforts as we do so.

► You may also like: President Ballard's miraculous trip to Ethiopia and the beginning of Latter-day Saint Charities