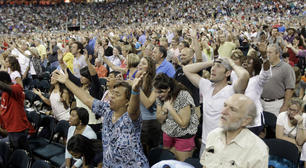 The Texas governor, now a Republican presidential candidate, held a prayer rally for tens of thousands, read from the Bible, invoked Christ and broadcast the whole event on the Web.

There was no symbolic nod to other American faiths. No rabbi or Roman Catholic priest was among the evangelical speakers. It was a rare, full-on embrace of one religious tradition in the glare of a presidential contest.

Looks like another raucous season for religion and politics.