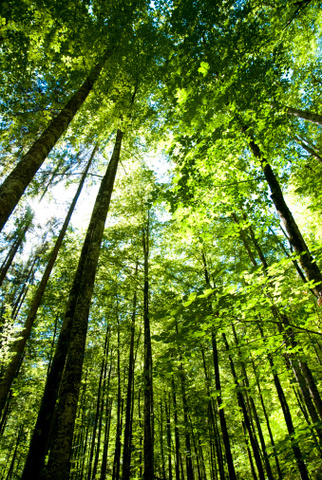 Why did Joseph Smith's father choose to live in Palmyra? Obviously, the Lord guided his pathway so that young Joseph could be near the Hill Cumorah where Moroni had buried the plates of gold upon which were written the abridgment of the Book of Mormon. However, for the Smith family it was a move of desperation.

After three years of failed crops in New England, hundreds of farmers from Vermont and New Hampshire fled to the west for the promise of better land. Joseph Smith's uncle, Stephen Mack, owned a mill in Rochester, New York, before Joseph Smith Senior moved to Palmyra, just twenty-three miles away. Some Church historians believe that the Prophet's father went to Rochester to counsel with his brother-in-law about where to live in the area.

What was the Sacred Grove? Most people know that this was the place behind the farm house where in the spring of 1820, young Joseph went to pray after reading James 1:5, "If any of you lack wisdom let him ask of God." This was known as the First Vision, wherein the Father and the Son appeared in a glorious light and gave instructions to the boy Prophet. But did you know that it was a grove of 750 to a 1,000 maple trees that was purposely not cut down and cleared, as had been the rest of their farmland? These maples were used for the harvesting of maple sap that was boiled down by the Smith family into maple sugar. Blocks of maple sugar were used like money on the expanding frontiers of a young America. The Prophet's mother reported that the family harvested an average of "one thousand pounds" of maple sugar a year.

Why didn't Joseph Smith pray vocally before the First Vision? In describing the events leading up to the First Vision, Joseph said, "I had never as yet made the attempt to pray vocally (JS─H 1:14)." In the LDS Hymn #26 "Joseph Smith's First Prayer" are the words "'Twas the boy's first uttered prayer." The key words in both of these statements were "vocally" and "uttered." Saying "Grace" over a meal and "silent prayers" were common in the Smith home as they were with most Bible centered families.

Seven-year-old Joseph would have seen his parents kneel in prayer and plead for the life of nine-year-old Sophronia who was stricken with typhus. Did you know that one of the traditions in Joseph Smith's day was that if you prayed out loud the devil would hear your prayers and interfere with God answering your prayer? Many modern day Christians still believe that the devil listens to your prayers. Joseph would learn that our Heavenly Father's power to answer all prayers was greater than the power of the devil to prevent them from being answered.

Did you know that early in the spring of 1820 when Joseph went to pray that there were only three mornings that could be described as "beautiful, clear" days? How do we know that? The U.S. Navy required a medical doctor, Dr. W. Wheaton to report on the status of the weather three times a day at a naval base near Palmyra, New York, on Lake Ontario. He reported on the weather at 7:00 a.m., 2:00 p.m., and 6:00 p.m. John Lefgren went to the government archives and made a photo static copy of the weather report for the spring of 1820. March 24, 25, and March 26, were the only days that the mornings were clear with a temperature above 40 degrees.

The Smiths were in the middle of collecting maple sap. The sap is pumped out by the freezing and thawing process. The sap will stop if the temperature stays above 40 degrees for more than twenty-four hours. Sunday, March 26, 1820, was the only day that met all the qualifications. The important thing is that the Father and the Son appeared and that was the beginning of the restoration of the Gospel through the Prophet Joseph Smith.

Did you know that the grave of E.B.Grandin, who printed the first edition of the Book of Mormon, was in the Palmyra Cemetery? He was born in 1806 and died in 1845. He was the editor of the local newspaper, the Wayne Sentinel. He was twenty-three years old when he printed the Book of Mormon. He was born a year after Joseph and died a year after Joseph was martyred. Both men were 38 years old. Another person buried in the same Palmyra Cemetery was Lucy Harris, the wife of Martin Harris, one of the Three Witnesses. She had the dubious distinction of having lost or destroyed the 116 pages of translation from the Book of Mormon.

There is so much to see and to feel when you stand on the street and see a church on each corner in Palmyra. If you decide to walk, it is only a mile and a half to the Hill Cumorah where Moroni buried in a stone box the abridgment of the Book of Mormon. On your way you will pass by a Mormon Temple. Where will your thoughts take you as you visit the Smith family farm or the grave of Alvin Smith or walk among the maple trees of the Sacred Grove?

--- John L. Lund has taught as adjunct faculty at major universities throughout Washington, Idaho, California and Utah. He is a consultant to both the business world and the private sector as a family counselor. He currently travels with Fun For Less Tours as an educator. Find out more about these tours.