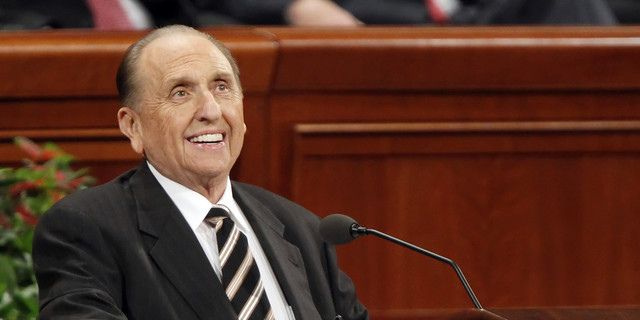 This Message from President Monson Will Warm Your Heart, Snow or No Snow

As winter approaches and the weather turns chilly, this experience President Monson had on a cold, winter night is sure to warm your heart and remind us of the meaning of Christlike service.

The opportunity to be a blessing in the life of another often comes unexpectedly. On one extremely cold Saturday night one winter, Sister Monson and I drove several miles to the mountain valley of Midway, Utah, where we have a home. The temperature that night was minus 24 degrees Fahrenheit, and we wanted to make certain all was well at our home there. We checked and found that it was fine, so we left to return to Salt Lake City. We barely made it the few miles to the highway before our car stopped working. We were completely stranded. I have seldom, if ever, been as cold as we were that night.

Reluctantly we began walking toward the nearest town, the cars whizzing past us. Finally one car stopped, and a young man offered to help. We eventually found that the diesel fuel in our gas tank had thickened because of the cold, making it impossible for us to drive the car. This kind young man drove us back to our Midway home. I attempted to reimburse him for his services, but he graciously declined. He indicated that he was a Boy Scout and wanted to do a good turn. I identified myself to him, and he expressed his appreciation for the privilege to be of help. Assuming that he was about missionary age, I asked him if he had plans to serve a mission. He indicated he was not certain just what he wanted to do.

On the following Monday morning, I wrote a letter to this young man and thanked him for his kindness. In the letter I encouraged him to serve a full-time mission. I enclosed a copy of one of my books and underscored the chapters on missionary service.

About a week later the young man’s mother telephoned and advised that her son was an outstanding young man but that because of certain influences in his life, his long-held desire to serve a mission had diminished. She indicated that she and his father had fasted and prayed that his heart would be changed. They had placed his name on the prayer roll of the Provo Utah Temple. They hoped that somehow, in some way, his heart would be touched for good and he would return to his desire to fill a mission and to serve the Lord faithfully. The mother wanted me to know that she looked upon the events of that cold evening as an answer to their prayers in his behalf. I said, “I agree with you.”

After several months and more communication with this young man, Sister Monson and I were overjoyed to attend his missionary farewell prior to his departure for the Canada Vancouver Mission.

Was it chance that our paths crossed on that cold December night? I do not for one moment believe so. Rather, I believe our meeting was an answer to a mother’s and father’s heartfelt prayers for the son they cherished.

Our Heavenly Father is aware of our needs and will help us as we call upon Him for assistance. I believe that no concern of ours is too small or insignificant. The Lord is in the details of our lives.

If you ask people what they love most about President Thomas S. Monson’s teaching style, chances are they’ll say something about the personal experiences he relates. The accounts President Monson shares are always true, taken from his own life or the real lives of other people. Those warm, memorable accounts have truly become a hallmark of his messages.