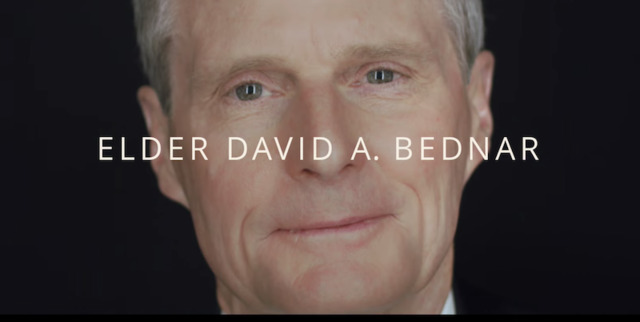 This Week from the Pulpit: Elder Bednar Shares in New Video Series What He Does to #HearHim

Many of us might have heard the phrase “Hear Him” lately. In his April 2020 general conference address titled, “Hear Him,” President Russell M. Nelson spoke about the importance of listening to Heavenly Father and Jesus Christ, just as Joseph Smith did during the First Vision.

In a news release on April 21, Church Newsroom announced a series of videos from Church leaders sharing how they #HearHim. The first video in the series features Elder David A. Bednar of the Quorum of the Twelve Apostles. Elder Bednar shares how he is able to hear the voice of the Lord through scripture study.

Read more about Elder Bednar’s video and what other Church leaders have said this week below.

In the first video of the #HearHim series, Elder David A. Bednar shares that he personally listens to the voice of the Lord by studying the scriptures.

“The scriptures are the prerecorded voice of the Lord,” says Elder Bednar in the video. “And it is not hearing an audible voice, per se, although that can happen. It is hearing the scriptures in a feeling.”

Elder Bednar also explains that revelation can come in the form of “thoughts to the mind, feelings to the heart.”

The apostle concludes by saying, “The scriptures, for me, are the key in being able to have those thoughts and feelings.”

President Clark G. Gilbert spoke remotely to individuals and families across the South Pacific on Easter Sunday about the benefits of education. In his message, President Gilbert emphasized that receiving an education enables a person “to hear the Savior, because it improves us, helps us learn who we are, and leads to blessings,” Church Newsroom Australia reported.

President Gilbert explained that the Savior does not speak in a harsh voice, and that we all need to have a place where we can “hear His small voice.” President Gilbert emphasized that we can hear the Savior’s voice despite bushfires, typhoons, or pandemics. We only need to listen.

The BYU-Pathway president also focused on the importance of women’s education and emphasized that a mother’s education will affect the education of her child.

In a recent virtual LDSBC devotional, President Bruce C. Kusch spoke to students about looking outward, inward, and upward while in isolation. According to Church News, President Kusch shared two stories about the consequences of not “looking up” and how these stories can relate to our own lives.

“If during this time we fail to look outward and miss the opportunity to look inward and upward, we might lose the opportunity to build and strengthen our faith in Heavenly Father and Jesus Christ—at a time when it is needed more than ever.”

President Kusch quoted a Church News interview with Elder Jeffery R. Holland: “This is a rare time of enforced solitude when we don’t have a lot of trivia or superficial busyness distracting us from considering the truly important things in life. Such times invite us to look into our soul and see if we like what we see there.”