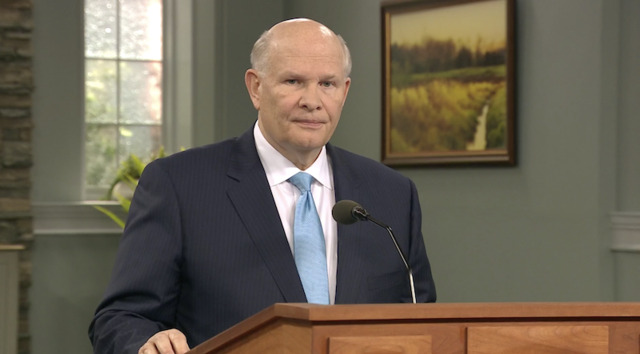 This Week from the Pulpit: How to Strengthen Our Foundations to Weather the Storms of Life

For many of us, life looks different from what we typically think of as normal. In light of the pandemic, it seems that our foundations have been rocked and we all could use some refuge from the storms of life.

In a devotional on Tuesday, April 28, Elder Dale G. Renlund of the Quorum of the Twelve Apostles suggested students prepare for the storms of life by undergoing a “spiritual seismic upgrade.” He counseled students to develop a strong foundation through faith in and understanding of the Atonement of Jesus Christ.

Read more about Elder Renlund’s remarks and see what other Church leaders have said this week below.

In a recent BYU–Idaho devotional, Elder Dale G. Renlund of the Quorum of the Twelve Apostles spoke to students about the need to prepare for life’s “seismic waves.”

► You may also like: What Exactly Will Happen during the Salt Lake Temple Renovation? Here’s What You Need to Know

Church News reported that Elder Renlund compared metaphorical seismic hits to our spiritual lives and the need for our own “base isolators.”

“These hits will be major. They will be real body blows to your sense of well-being,” the apostle said. “For each metaphorical seismic hit, I will suggest one or two metaphorical base isolators that can be put in place to help you withstand the blow.”

These metaphorical base isolators are developing faith in Heavenly Father, recognizing the resilience and strength we have been given from Heavenly Father, and understanding how Jesus Christ’s Atonement can be applied to our own lives.

President Clark G. Gilbert, president of BYU-Pathway and an Area Seventy, virtually addressed LDSBC students in a devotional on Tuesday, April 28. President Gilbert spoke to students about the importance of continuing education during times of war and pandemic.

President Gilbert based much of his address on scholar C.S. Lewis’s sermon entitled, “Learning in War-Time.” Within his sermon, Lewis told his students that a crisis or difficulty in one form or another would affect their growth and academic pursuits—there would always be a rational reason to put off schooling. Lewis encouraged his students to continue with schooling even amidst a war, because educated individuals are always needed.

“Today, we are facing the crisis of a global pandemic. For C.S. Lewis and his students at Oxford, that crisis was the Second World War. . . . Despite the visibility of a physical war or the scale of the global pandemic we now face, C.S. Lewis reminded us that those crises in many ways are nothing new in the lives of our individual students,” President Gilbert said.

President Gilbert promised students that by fighting through the challenges of the current crisis, they will gain skills that will help them throughout the rest of their lives. He encouraged students to “keep learning and trust in the Lord” and that they “will be blessed with abilities” to survive the crisis.

LISTEN TO PRESIDENT GILBERT’S TALK IN ITS ENTIRETY HERE.

► You may also like: President Cordon Interviews the 18-year-old Who Spoke in Conference