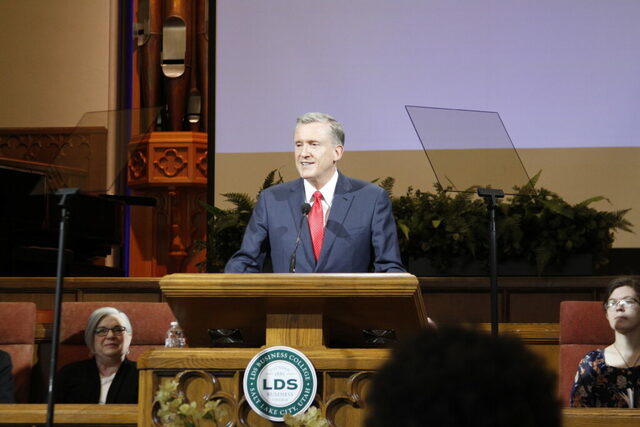 This Week from the Pulpit: Imposter Syndrome Can Be Overcome by the Knowledge that God Never Leaves Us

Even if you are truly successful at something, do you ever feel that maybe somehow you are an imposter? We might chalk up our hard work and talents to good fortune or a lucky break, but Heavenly Father does not want us to feel “under qualified,” because He is with us always. Elder Kevin R. Duncan recently spoke to LDSBC students about overcoming “Imposter Syndrome” and instead trusting in the Lord.

Although President M. Russell Ballard is the acting president of the Quorum of the Twelve Apostles, he is also remembered by some as their mission president.

President Ballard addressed missionaries serving in the city about the importance of the work they were doing. In regards to missionary work, President Ballard said, “You are not teaching lessons. . . . You are teaching God’s children.”

Church News also reported that President Ballardemphasized the idea that great missionaries teach with the power of the Spirit.

President Ballard also spoke to members of the Brampton Ontario Stake. Although he could not shake hands with any of the members amid concern over the coronavirus, he embraced them.“I didn’t shake their hands,” he said. “I just put my arms around them and gave them a hug. That wasn’t on the ‘Do Not Do’ list.”

Sister Reyna I. Aburto, second counselor in the Relief Society general presidency, was the keynote speaker at the fourth annual International Women-in-Diplomacy Day.

Church Newsroom reported that Sister Abruto’s address focused on the power and influential nature of women. “A great woman is not a woman who does the work of ten women, but one who is able to inspire ten women to accomplish their own work,” Sister Aburto told the audience.

Sister Aburto posed the question, “What can I do to inspire other women, so each of us becomes the solution to our problems?” She continued, “Each of us has the potential to be the solution.”

Sister Aburto also provided information to the audience about the Relief Society organization and its current efforts to help others at local and global levels.

She concluded by encouraging audience members to build each other up. “As we try to solve the problems of the world, we can enlighten each other, counsel together and find local solutions to our problems. Together, each of us can be the solution. And as women, we can have influence on protecting [the] interdependency between men and women.”

Elder Kevin R. Duncan spoke to LDSBC students (recently renamed Ensign College) about a feeling that students and young adults might be feeling now more than ever.

Church News reported that Elder Duncan introduced a new acronym to students’ vernacular: FOBFO “fear of being found out” or “the imposter syndrome.” Elder Duncan explained that many who suffer from “FOBFO” fear others will find out that they aren’t really as successful or good as they appear.

It is stated that an estimated 70% of people suffer from imposter syndrome at some point in their lives. Elder Duncan pointed to “the false veneer of social media perfection” as the fuel for these feelings of unworthiness.

In order to thwart these feelings, Elder Duncan encouraged students to “listen. . . to the angels of hope and to the source of all hope, that being Jesus Christ, the only true source of hope.”

Elder Duncan also reassured students by explaining that many scriptural heroes felt “under qualified.” In regards to these people’s triumphs, Elder Duncan said, “When things seemed most difficult, they trusted God.”

Elder Duncan explained that God gives us weaknesses necessary for humility, but we are not alone in our struggles. He said, “though we are weak and human, God assures us that He will be with us, that He will walk with us.

“We are strong because of Him. Whether it is to secure brass plates, build a ship, confront Pharaoh, earn an education, get married or raise a family, He will increase our capacities and make weak things become strong. He will be with us.”