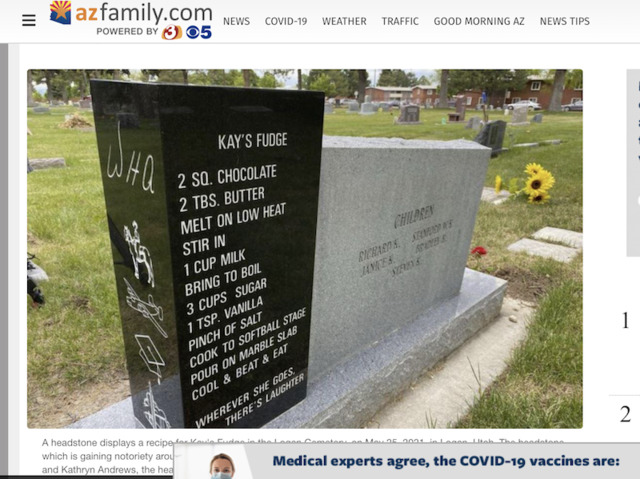 It’s some of the sweetest news circulating national news lately, and for good reason. After all, it’s not every day one comes across a headstone featuring things like an airplane, a graduation cap, and perhaps most unusual—a fudge recipe. But equally charming are the lives of the couple buried there.

Wade and Kathryn “Kay” Andrews had quite the love story. According to azfamily.com, Wade was a U.S. Air Force captain during World War II when he first met Kay at a church function in New York City. She was studying fashion design at the time, and they went on one date at the Astoria Hotel where they had a photographer take a picture of them. Wade returned to the war in Europe the very next day.

The couple may have been separated by physical distance, but they grew closer by writing over 100 letters to one another during their time apart. When Wade returned, he proposed to Kay on the steps of the Utah State Capitol Building. The couple, members of The Church of Jesus Christ of Latter-day Saints, married 18 days later on December 18, 1944. They had five children.

Although they moved many times during their married life, Wade and Kay eventually settled down in Logan, Utah. When Wade passed away in 2000, Kay chose the images on his gravestone. Kay passed away in 2019 at age 97, but before she did, she decided to put her fudge recipe on her side of the headstone. According to azfamily.com, she was aware of its popularity before she passed and was glad that it brought a smile to people’s faces.

Today Show writer Terri Peters said that Kay “would often write poems and deliver fudge to friends and family as a way of offering them encouragement.” Azfamily.com also shared that Kay would carry Tootsie Rolls in her purse for children when they needed their day brightened. Her daughter Janice Johnson told the news outlet that her mother lived by prayer, and that it was very important to her.

Peters recently wrote about her experience making Kay’s Fudge and gave some tips and tricks she learned along the way, explaining how to test for doneness and how to help the fudge set.