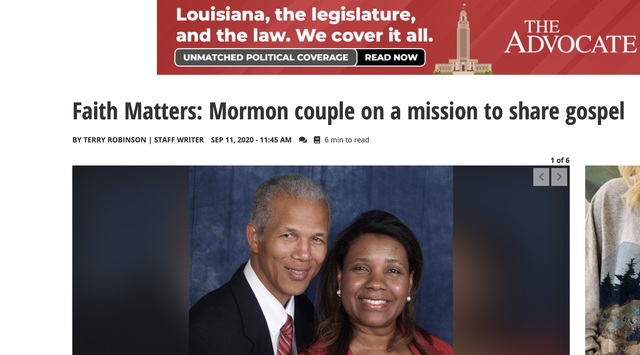 This mission leader was a part of the NASA team putting a rover on Mars, but she missed its launch to serve the Lord

John and Michelle Wright Amos are both converts to the Church. Michelle was raised Baptist but was one of 13 members of her family baptized into The Church of Jesus Christ of Latter-day Saints on January 21, 1979, according to the New Orleans Advocate. She would later introduce her classmate, John Amos, to the Church by asking him to attend an activity with her. John had been raised Catholic but was interested in learning more. He spent his senior year at Southern University learning about the Church and by the end of that year felt he had received a witness of the truthfulness of the gospel. He and Michelle were married in 1990.

The couple made great sacrifices to serve a mission. Sister Amos even missed perhaps one of the most significant moments of her career at NASA when her team put a rover on Mars because of her desire to serve with her husband in the Louisiana Baton Rouge Mission. Their service began at the beginning of July and the rover launched July 30, 2020.

“It was exciting. I was able to watch it on NASA Live, but if I was (still working for the) Kennedy Center, I would have been there at the launch and working with some of the people who worked on that rover,” she said.

The couple is now presiding over 226 young missionaries. They have already had wonderful opportunities to help others in the first few months of their service as mission presidents in Baton Rouge as they have dealt with hurricane recovery.

President Amos also spoke of the Church’s efforts to work together with the NAACP to improve race relations as black people make up just 6 percent of the 16 million worldwide members of the Church, but said he doesn’t see race as a day-to-day issue in the Church.

“Of course, the culture is different compared to the culture we experienced as youth in our family’s predominantly African-American church and community, but our focus on service to God and spiritual growth as Christians have not been impacted because of our race,” President Amos said. His wife, however, says that she does miss the “good gospel soul music.”