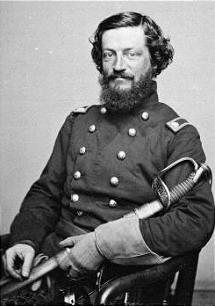 Thomas L. Kane, an influential friend to Brigham Young and the Mormon pioneers was an important non-Mormon in Latter-day Saint history, said Matthew J. Grow, director of publications for the Church History Department.

Kane was promised by early Church leaders "that his name would be had in honorable remembrance among the Saints in all generations," said Brother Grow, who has authored a recent biography on the army colonel, attorney and social reformer. Brother Grow was the second speaker in the May 7 Pioneer Symposium of the National Society of the Sons of Utah Pioneers.

On May 13, 1846, the day the United States declared war on Mexico, Kane, then 24, attended a conference of the Church in Philadelphia, Pa., and heard the preaching of Jesse C. Little, a merchant and head of the Church in the eastern states, Brother Grow recounted.