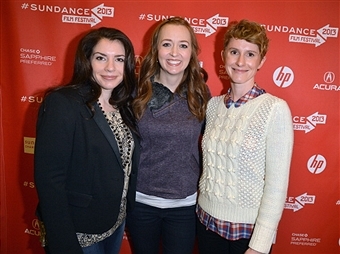 Jerusha Hess was already a big fan of Shannon Hale’s work when they first met.

“I had just read all of her children’s stories in a row, back to back, and I was like, ‘Where have you been all my life?’” she said in an interview with LDS Living. So when they met, Hess, who had already co-written the screenplays for Napoleon Dynamite and Nacho Libre with her husband, told her, “I want to make your anything into a movie.” And Hale gave her another book she had recently published—this one an adult chick lit for fans of all things Jane Austen.

Hess read it overnight, and less than 24 hours later, Shannon Hale had an email in her inbox: “We need to make this movie.”

They started working on the screenplay for Austenland in 2009. Hale explained, “It was Jerusha on one side, being the veteran screenwriter, knowing film, and having a great sense of humor and the visual storytelling, and then me on the other hand, with a lot of writing experience and no film experience, having a good sense of the story and the character and character arc—and then, BAM, we collided, and it was awesome.” As if to emphasize the awesome collision, Hess high-fived Hale energetically.

As they progressed on the screenplay, they got Stephenie Meyer, the author of the Twilight series, involved. “We’d been friends for a few years,” Hale said, “and she’d always liked Austenland and she’d always talked about how it’d make a great movie. . . . She read the script and gave us feedback, but it was a year and a half later when she officially became involved [as a producer]. . . . We went away together, the three of us. We had a ladies’ weekend to talk about it.”

And when they finally got to the production stage of the film, they had plenty of opportunities to share their LDS faith with others. “Most people are actually pretty respectful of our beliefs, or interested, or amused,” Hale said. “Jane Seymour and I have had a lot of talks.”

And after the long days on the set all week long, they all went to church together on Sundays with their families. “Being an active LDS member—it’s your whole life,” Hess said. “It’s just who we are. A couple of dorky Mormon people.”

For Hale, having other Latter-day Saints on set was a neat experience. “When I’m out in the book world, I’m usually the only LDS person, and so I’m sort of this anomaly by myself, which can be funny and that’s okay. But on the set there were a whole bunch of us. With me and Jerusha and Stephenie, we were all weirdos together, and so there was no questioning of it. It was just like, ‘Oh, they’re all weird Mormons, that’s cool.’”

“I think we’re probably soul mates,” Hale said after all the time they’ve spent working together.

Austenland will be distributed by Sony in theaters nationwide later this year.