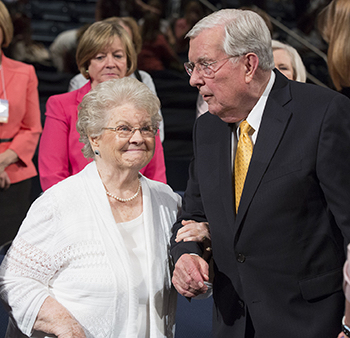 When President M. Russell Ballard stepped up to the pulpit on Sunday morning, he revealed that the talk he would proceed to give was prepared before his wife’s passing on October 1, 2018, after battling many health problems, including Alzheimer's.

“My talk was prepared some time before the passing of my dear wife Barbara. My family and I thank you for your love and outreach and kindness,” he said.

As his talk continued, President Ballard spoke of his great-grandfather, President Joseph F. Smith, who had his own experience with loss, losing his father, his mother, one brother, two sisters, two wives, and thirteen children. As President Ballard said of President Smith in his talk Sunday morning, “He was well-acquainted with sorrow and losing loved ones.”

And so, speaking of his very own great-grandfather, President Ballard spoke of how the sting of loss is swallowed up in the joy of understanding a loving Heavenly Father’s perfect plan, 100 years to the week after the vision of the redemption of the dead was received.

An essay written by Robert L. Millet regarding the vision of the redemption of the dead explains how President Smith’s heart was prepared to receive the revelation, 100 years ago this week:

On Thursday, October 3, 1918, President Smith, largely confined to his room because of illness, sat meditating over matters of substance. No doubt because of the world situation, his own suffering, and the loss of loved ones, it has been suggested that “he had long pondered the problems connected with making family ties complete in the patriarchal lineages.” On this day, the prophet specifically began to read and ponder upon the universal nature of the Atonement and the Apostle Peter’s allusions to Christ’s postmortal ministry. The stage was set: preparation of a lifetime and preparation of the moment were recompensed with a heavenly endowment—the vision of the redemption of the dead. In the words of the President: ‘As I pondered over these things which are written, the eyes of my understanding were opened, and the Spirit of the Lord rested upon me, and I saw the hosts of the dead, both small and great’ (D&C 138:11).

Speaking of his great-grandfather, President Ballard said, “He must have been comforted to know that all spirits retain the likeness of their mortal body and that they are anxiously awaiting the day of their promised resurrection. The vision revealed more fully the depth and breadth of Heavenly Father’s plan for His children and Christ’s redeeming love and matchless power of His Atonement.”

President Ballard invited those listening to read and ponder the revelation, adding his own witness of its truthfulness. He closed his remarks by expressing why this doctrine has become even dearer in recent days.

“How grateful I am today, my brothers and sisters to know where my precious Barbara is and that we will be together again with our family for all eternity,” President Ballard said. “May the peace of the Lord sustain all of us, now and forever is my humble prayer.”