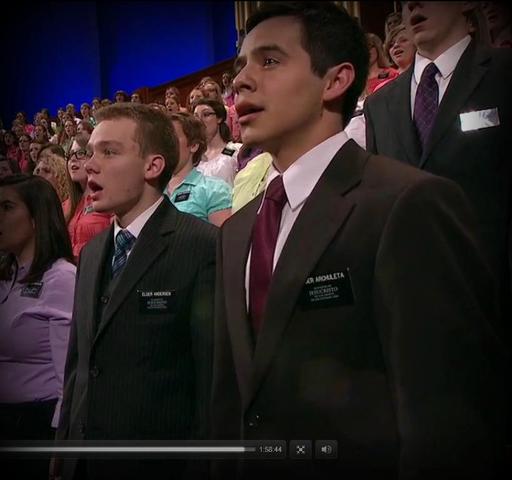 Timeline: The Church of Jesus Christ of Latter-day Saints in 2012

Check out more information on big events of the LDS Church and its people in 2012:

Jon Huntsman wasn't in it for long, but he still had time for a few well-written articles to get out there:

But it was hard to beat his appearance on SNL:


Eventually he supported fellow Mormon Mitt Romney in his difficult campaign for the Republican party bid against numerous contenders:

Jon Huntsman Jr. ready to hit the campaign trail for Mitt Romney, calling him 'best of the options we have'

February 18, 2012
Elizabeth Smart married her fiancé in the Laie Hawaii Temple in a surprise wedding (well, surprising to the press). Ultimately their pictures appeared in People magazine and word got out.

March 22, 2012
City Creek Mall opens, a big effort by the Church to help Salt Lake City and draw more people to the city that is headquarters for The Church of Jesus Christ of Latter-day Saints:

Before he left, he posted a couple great videos:

He was also seen singing with the missionaries during April 2012 General Conference:

May 21, 2012
BYU’s rugby team wins the national D1 championship for the first time ever.

July 30, 2012
The Italian government grants the Church “official” status as a religion, allowing it more freedom to operate within the country.

July-August 2012
Mormons compete (and medal) in the 2012 London Olympic and Paralympic Games.

Get a full list of LDS participants in the 2012 games.

August 21, 2012
President Monson celebrates his 85th birthday with a gala of songs and events.

August 28, 2012
Mitt Romney is officially named the Republican Party candidate for the U.S. presidency, becoming the first Mormon to be the candidate for a major party:

Majority of Protestant pastors back Mormon candidate, but some undecided

His wife, Ann, made numerous appearances on behalf of her husband and received praise for her poise. One of our most popular stories on this was:

LDS missionary applications jump from 700 to 4,000 a week

Mormon Media Observer: Election - regardless of result - a cause for Mormons to celebrate

Still, many people felt his campaign did positive things for the LDS Church:

And the winner is . . . the Mormon church

A Mormon reporter on the Romney bus

December 5, 2012
The LDS church unveils a new website on same-sex attraction, mormonsandgays.org, aimed at promoting understanding of the issue:

This year also saw numerous temple dedications and rededications. Those temples were, in chronological order: