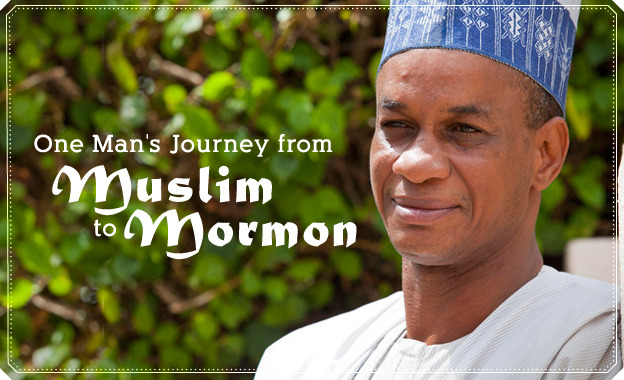 1. My Name Used to Be Muhammad: One Man's Journey from Muslim to Mormon

Members the world over were inspired this year by the conversion story of member Tito Momen, a Muslim from Nigeria who was imprisoned for his faith. Formerly a jihad cleric named Muhammad, Momen shares his his journey from Muslim to Mormon, through imprisonment in Egypt as an infidel, and back home again in one of the most touching, faith-promoting stories we have ever had the privildge to hear.
-->Go to article

2. Inside the Mind of the Mormon Man

Books and discourses abound on the differences between men and women. So this year LDS Living set out to understand the enigma that is the Mormon man, surveying 500 men, conducting focus groups, and interviewing experts in the process. This study was not a scientific one, and the results will not accurately represent every single LDS man, but we’re confident that we now have a good grasp on what goes on inside the mind of a Mormon man.
-->Go to article

3. Nine Things Not to Say to a Depressed Loved One

As society slowly begins to understand the reality of mental illnesses, talks like Elder Holland's October conference address on the dangers of depression inspire greater sympathy for those who face these very difficult trials. In an effort to help the loved ones of those struggling with depression, in our September/October issue we gave you some things to say that will help both of you feel better--and based on your response, for many of you, this simple phrases made a big difference.
-->Go to article

4. What Not to Say to Stay-at-Home or Working Moms

We at LDS Living know that motherhood is a full-time job in and of itself, and not all mothers are in their ideal circumstances. Sometimes thoughtless words by well-meaning observers can cause women to become defensive about their lifestyle, so in the March/April issue of LDS Living, we put together some assumptions not to make and topics to avoid when speaking to both stay-at-home moms and mothers in the workforce.
-->Go to Stay-at-Home Moms article
-->Go to Working Moms article

5. Methodist Mom: How my Son's Mormon Mission Changed my Life

Remember Methodist Ann Cochran who wrote "My Son, the Mormon" back in 2007? This year brought us another inspiring conversion story--hers! After Cochran's son served an LDS mission in Italy, she was inspired her to take a spiritual journey herself. With the support of her husband and inspiration from her son, she found peace through a unique balance she struck with her LDS Bishop and Methodist minister in a story that we just love.
-->Go to article

6. Greatest LDS Songs of All Time

Contemporary Latter-day Saint composers have had a profound impact on Mormon culture with their beautiful melodies and inspiring messages. This year, we at LDS Living wanted to pay tribute to these talented people and preserve an important part of our Mormon heritage by searching out the 100 greatest LDS songs of all time. After an extensive survey, you made your voices heard, and we presented the results in our January/February issue of LDS Living. Now, you can even pick up the CD featuring several of the songs!
-->Go to article

Last January we gave you some comforting, delicious, and nutritious options to help you get started on your New Year's resolutions--and they were a huge hit! Now that we're almost back to another calendar year, if eating less or eating better is on your to-do list this new year, dig into these low-calorie meals that are sure to satisfy.
-->Go to article

8. The Artwork of President Eyring

With the release of Henry B. Eyring's innovative new biography this year, we learned so much about this amazing man. The biography, which pulls extensively from personal journal entries President Eyring released for its production, showed us a lot, from his down-to-earth family life to his humility in serving. But what we were most impressed by was his artistic ability. In this gallery, we shared some of our favorite sketches and paintings released exclusively in the print biography--and on the LDS Living blog!
-->Go to article

9. Ten Things You Didn't Know about the Angel Moroni Statue

This year, with 2 new temples announced and many more planned and under construction, we're seeing Moroni closer and closer to home. This iconic LDS statue can be found in 46 countries around the globe, but when was the last time you actually stopped to look at it? Is Moroni actually holding something in his left hand? Is the statue made of fiberglass or bronze? Check out these 10 things you didn’t know about the angel Moroni statue--until we uncovered them for you in the November/December issue of LDS Living Magazine!
-->Go to article

10. Best Advice I Have Ever Received

Many of us have mottos we live our lives by or pieces of advice shared by others that have changed the way we think and act on a daily basis. So, we asked out readers and favorite LDS figures alike: what’s the best advice you’ve ever received? The answers we got back were so fabulous, we shared them with you in our March/April issue. From Michael McLean to Julie B. Beck to readers like you, the advice in this great compliation still holds true through today and tomorrow.
-->Go to article

Lds Life ,Lds Life
Comments and feedback can be sent to feedback@ldsliving.com