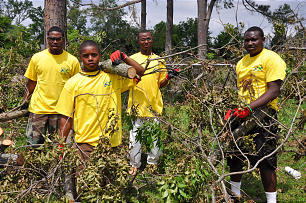 Tornado damage extensive: More than 3,000 volunteers get to work

Over the past decade Ron Harmon, president of the Birmingham Alabama Stake, has traveled throughout the Southeastern United States on a half dozen occasions to join with fellow Mormon Helping Hands volunteers following weather disasters in the region.

On the weekend of May 7 and 8 this year thousands of Latter-day Saint relief workers headed his way. The Birmingham stake, along with the neighboring Bessemer and Huntsville stakes in the northern half of Alabama were ground zero for the largest and most damaging tornado outbreak in U.S. history. On Wednesday, April 27, hundreds of tornadoes swept out of Mississippi, tore across northern Alabama and continued into northern Georgia and southern Tennessee. EF5 tornadoes, the most severe level, were common.