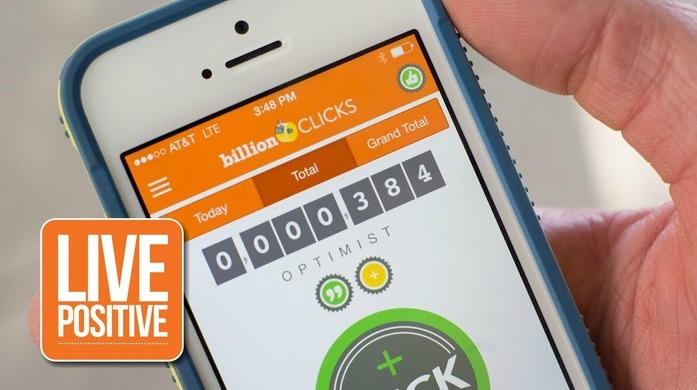 It's said that the average person thinks 300 negative thoughts a week, and that's a statistic LDS singer Hilary Weeks couldn't believe—until she counted. "After seven days of clicking each discouraging, gloomy, depressing thought, I felt discouraged, gloomy, and depressed," she says. “I looked back over my week trying to figure out what changed in my circumstances and nothing had,” Weeks said in an interview with KSL news. “Then I realized it was the experiment. Clicking my negative thoughts was giving them enough power to change my mood.”

Armed with this knowledge, Weeks set out to help others count their positive thoughts and be happier. But carrying around a clicker to count thoughts was too invasive into a normal life. She quickly came up with a better solution: an app.

The Live Positive App was proposed in November of last year, and a Kickstarter campaign to fund it ultimately garnered $13,274 for the project. After months of careful development, the app released today for both iOS and Android devices.

The Live Positive app is now AVAILABLE! Share this Live Positive App Commercial or a screenshot of your Live Positive app on social media, using the hashtag #BillionClicks, before Friday, March 27, and you will be eligible to win a $25 gift certificate from the Billion Clicks store! We will be giving away four prizes. One award for each social media platform: Facebook, Instagram, Twitter, and Pinterest. Share on all social media platforms to increase your chances of winning! Use the hashtag #BillionClicks to be eligible! Thanks for helping me spread the word about this positivity packed app! Posted by Hilary Weeks on Wednesday, March 25, 2015

"The concept of 'clicking' has spread," Weeks shares. "Thousands of people have become 'clickers'—noticing and giving power to every positive, encouraging, motivating thought through clicking. And new we invite you to join us!" Weeks hopes to get to a combined 1 billion "clicks" between all the users of the app.  "Think of the impact one positive thought can have. Now multiply that by a BILLION and watch the world around us change."

Tomorrow, Weeks will be celebrating the release as part of her 3rd Annual National Click Day, an event dedicated to positive thinking. And if you happen to live in Utah, you can come celebrate with her March 26th at the Roxberry in American Fork from 6-7:30pm. Get more details.