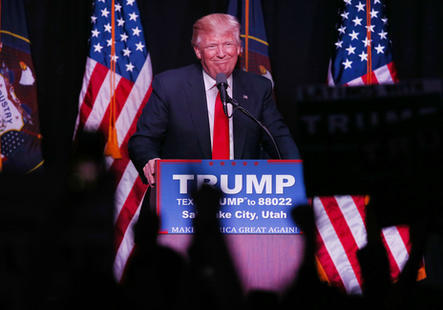 Trump: Mormons Are the Hardest Working People . . . And They Constantly Give

Though the Romney and Trump political battle continues, one surprisingly positive thing did surface from this tussle: that Donald Trump loves Mormons and admires their work ethic, industry, and generosity.

GOP presidential frontrunner Donald Trump said Friday, "Do I love the Mormons," at a campaign rally in Salt Lake City, then asked whether Mitt Romney, the party's 2012 nominee, was really a Mormon. . . .

Another jab Trump took at Romney was about his campaigning for the other Republican in the race, Ohio Gov. John Kasich, before saying he would vote for Cruz. "People say, are you sure you know what you're doing?"

Trump praised Mormons a second time in his 45-minute speech, saying a friend he identified as Jewish, calls Mormons "the hardest working people. He loves the Mormons."

Many Mormons work for him, Trump said, "and they constantly give" to their church, directly from their paychecks. "They say they don't want to be tempted by keeping their money," he said.