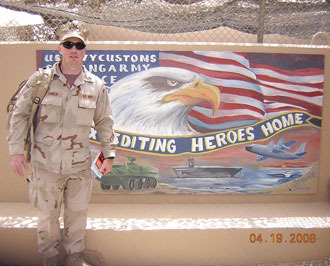 Trusting God, others while serving in the military

It's 6 a.m. and already the canvas tent at Base Camp in Kuwait is filled with the heat of the morning light.

But for Dennis Franklin, morning means thoughts about evening back home in Utah. On the other side of the world, his wife, Carrie, is putting their three children — ages 8, 6 and 15 months — to bed alone, once again. That was the scene from more than two years ago.

What quietly tests Dennis Franklin's faith the most in his career with the U.S. Navy is "separation from my family and not being able to take care of them." Franklin, a chief petty officer, served in Kuwait from August 2007 to May 2008. He was 500 miles away from home heading to Kuwait when he learned he had to rely on God to take care of his family.