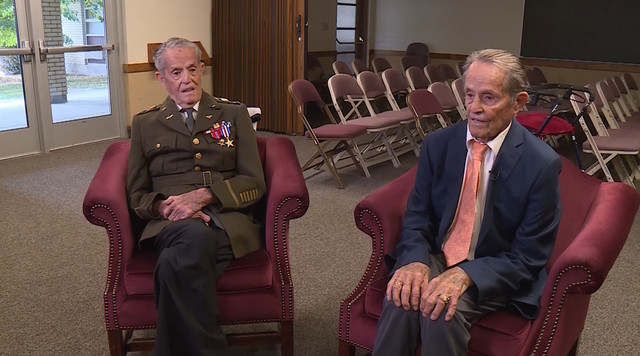 What's the secret to a long life? According to Latter-day Saint twins who just celebrated their 100th birthdays, it's living the gospel. "The 89th section of the Doctrine and Covenants says keep the commandments, you’ll be forever protected, and that’s what’s happened,” Boyd Henderson said.

For twin brothers Ralph and Boyd Henderson, it’s been a long road to reach their 100th birthday.

The two World War II veterans were born Sept. 6, 1918, in Arimo, Idaho. The brothers say being a twin is special. “Yes. A lot of things we do together and had to suffer together,” Ralph said.

The twins graduated from Pocatello High School in 1936 and attended a year of college. About that time, the brothers were considering serving a mission for The Church of Jesus Christ of Latter-Day Saints. But everything changed when Ralph's draft number was read on the radio in 1941.

Mormon Life VeteransVeterans,Mormon Life
Comments and feedback can be sent to feedback@ldsliving.com