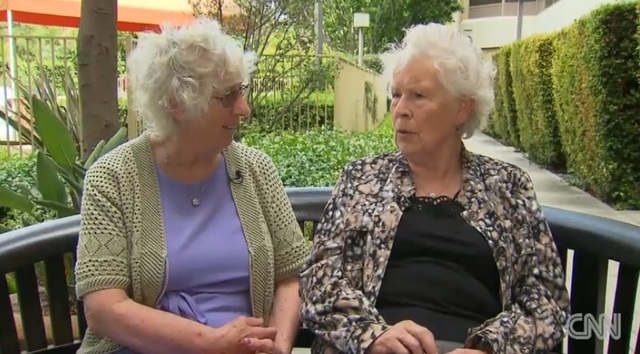 Twins Reunite After 78 Years Thanks to Family History

Ann Hunt had the surprise of a lifetime after her daughter showed her the birth certificate of Elizabeth Hamel—Hunt's fraternal twin she didn't know she had.

Hunt and Hamel were born in 1936 in Aldershot, England, to Alice Lamb. Lamb was a domestic cook by trade and a single mother. Unable to afford to care for both her daughters, Lamb kept Hamel, who had a curvature of the spine, and Hunt was adopted by another family.

As time went on, Hamel grew up knowing she had a sister out there. Hunt did not, though she found out she had been adopted when she was a teenager.

Then in 2001, Hunt's daughter Samantha Stacey was doing genealogy research when she came across Hamel's birth certificate.

Stacey found a step-grand-nephew of Lamb's who knew the story of Hunt's adoption. He also told Stacey that Hamel was living in the U.S. and he knew how to contact her.

Stacey then wrote a letter to Hamel, who lives in Oregon, and asked if she was born in Aldershot, England. When she received a phone call from Hamel in reply, Stacey learned the woman had indeed been born in England.

Within minutes, Stacey put Hunt on the phone and the two long-lost sisters were talking to each other.

The twins reunited in 2014 after nearly 78 years apart, setting a Guinness World Record for the longest period of time a set of twins were separated.

And although the twins lived on different continents and were raised by different parents, they did find some similarities.

They were both raised as an only child and married men with the same first name and same last initial.

But these were just a few things the twins learned about each other during an unexpected reunion 78 years in the making that could not have happened had it not been for the help of family history research.