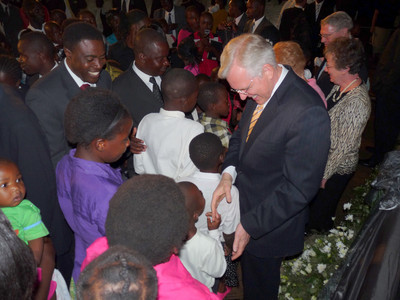 Two African nations dedicated for preaching of the gospel

Two African countries — Angola and Burundi — have been dedicated for the preaching of the gospel after two apostles traveled a combined distance of 120,000 miles — 34,000 of them in seven African countries. Elder Jeffrey R. Holland and Elder D. Todd Christofferson of the Quorum of the Twelve traveled for two weeks visiting and instructing Church members gathered throughout the Africa Southeast Area.

Elder Steven E. Snow of the Presidency of the Seventy and Bishop H. David Burton of the Presiding Bishopric were also on assignment in the area.

A host of meetings including nine member meetings, eight missionary meetings, four priesthood leadership meetings, four young single adult devotionals and other special meetings, including interviews with media, were held as the Church leaders and their party divided up responsibilities and traveled throughout the area. Elder Holland visited the countries of Burundi and two areas in South Africa, and Elder Christofferson visited the Democratic Republic of Congo and Zimbabwe.