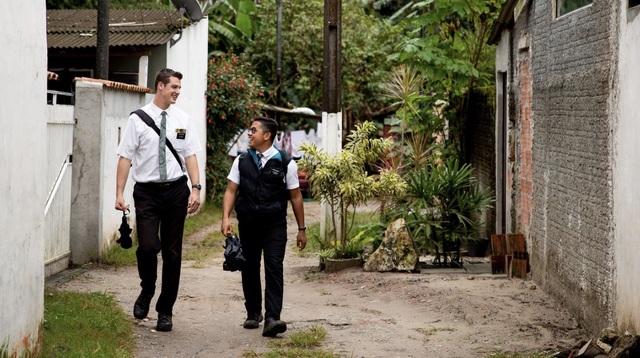 Latter-day Saints made some noise for both teams during Saturday night’s BYU-Utah rivalry game, but you may not know that it was a big day for another Latter-day Saint on the gridiron.

While BYU and Utah geared up for their big game on Saturday, Stanford QB and returned missionary Tanner McKee turned in the highest QB ranking in NCAA Division I football, completing 16 of 23 passes for 234 yards and two touchdowns. His performance led Stanford to an upset win over in-state rival USC.

McKee, a sophomore, served a mission in Brazil from 2018–2020. During that time he was “100 percent missionary,” but after he got home he was itching to prove something.

“I want to help everyone understand you can go on a mission and still be successful in your sport. So many people think I am crazy for going. I want to show them you don’t have to choose between faith and football. You can do both. I believe I will be a better football player when I return,” McKee told the Deseret News.

McKee had wanted to serve a mission since he was a little boy, and he trusted that his mission would make him a better player.

“Serving a mission will help me improve my game at a higher level for sure. I’ll come back more of a man,” McKee says. “I’ll have passed through more experiences in life so I can get to know my teammates better and how to work with people. One of the most important roles as a quarterback is to help everyone reach their full potential. As a missionary, I’m trying to help the people that we’re teaching to reach their full potential.”

Jaren Hall has been excellent in leading BYU to a 2-0 start.

He has been INT-free while throwing for five TDs with a pass eff rtg of 140+.

BTW, Hall and McKee are both returned missionaries.

BYU quarterback Jaren Hall recorded the 5th-highest quarterback rating for the week. Hall is also a returned missionary who served in California. He’s also the son of former BYU running back Kalin Hall, who joined the Church during his time as a Cougar. Hall said as a high schooler that his dad’s conversion played a big role in his decision to attend BYU.

“I’ve just listened to all his stories about his time there, about how BYU changed his life and put him in the right direction. That’s where he joined the [LDS] Church and it really put him on the right course and that’s obviously been a huge blessing for me and the rest of my family. I want those same type of experiences,” he said.

For decades we’ve heard Super Bowl winners declare after the big game, “I’m going to Disneyland!” So on Saturday night when BYU defensive lineman Uriah Leiataua was asked where the after-party was to celebrate the Cougars breaking a nine-game losing streak against Utah, the cleanest answer may have been something related to Disney World. Think again.

“I’m gonna go to bed, so I can go to church. I’m going to church!” Leiataua proclaimed, eliciting cheers from his teammates. Leiataua, also a returned missionary, served in Apia, Samoa.