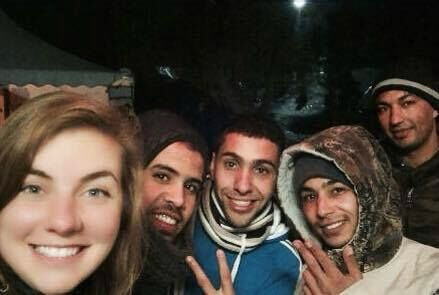 USA Today: He Was a Moroccan Muslim in a Refugee Camp. She Was a Mormon Volunteer. They Fell in Love.

Recently, USA Today College told an unusual love story—that of a Moroccan Muslim and a Mormon volunteer who fell in love at a refugee camp in Greece.

But in December, Harris and her cousin saw a video on social media of the conditions of Greece's Camp Moria.

“We both saw it and thought, ‘What are we doing, just traveling for fun?’” Harris told USA Today. “We both just felt that we needed to go there. . . . We just went to the camp and asked where we could help. They said, ‘right here,’ so we dropped our bags and worked, for almost a month.”

Harris was in charge of giving the refugees, who came to Greece floating across the sea on rafts, hot tea and dry clothes. One day at the overcrowded camp, a Moroccan she helped told her she had beautiful eyes.

After that, the man, Soufiane El Yassami, talked with Harris often, eventually telling her he liked her.

It wasn't until her last day, when Harris returned to find the camp in chaos and discovered that 600 Moroccans and Algerians in the camp had been arrested, including El Yassami, that she realized how much she cared about him.

Through Facebook, Harris was able to reconnect with El Yassami while he was in jail, and the two have messaged every day since. In fact, Harris recently visited El Yassami, who is now working in Casablanca, and stayed with his family while they attended his brother's wedding.

The two found a fun connection serving people around Casablanca together, El Yassami saying he wants to help people like Harris helped him.

Find out more about this incredible love story and Harris and El Yassami's plans for the future at USA Today College.

Lead image from USA Today of Carly Harris and Soufiane El Yassami with two others at Camp Moria.