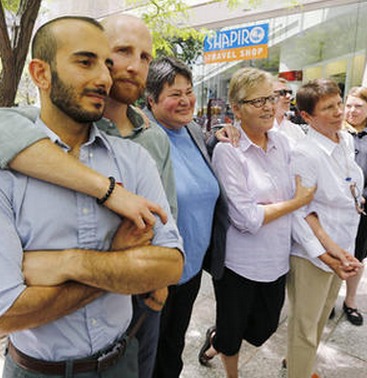 SALT LAKE CITY — Utah is going straight to the nation's highest court to challenge a federal appeals court's finding that gay couples have a constitutional right to marry, the state attorney general's office announced Wednesday. The state opted to appeal the decision to the U.S. Supreme Court rather than request a review from the entire 10th U.S. Circuit Court of Appeals in Denver. That option is now off the table, no matter what the high court decides.

Utah Attorney General Sean Reyes' office said in a statement the appeal will be filed in the coming weeks, to get "clarity and resolution" from the highest court. "Attorney General Reyes has a sworn duty to defend the laws of our state," the statement said.

The Supreme Court is under no obligation to hear the appeal of the June 25 ruling by a three-judge 10th Circuit panel, said William Eskridge, a Yale University law professor. There also is no deadline to make a decision, he said.

News From Utah Marriage Family Utah FamilyMarriage,Family,Utah,Family,News From Utah
Comments and feedback can be sent to feedback@ldsliving.com