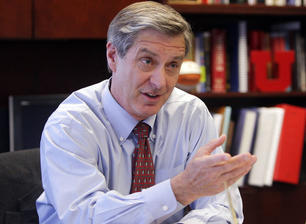 Given the overwhelming interest in last week's column, I felt it deserved a follow-up. So I called Utah athletic director Chris Hill about the issues I addressed last week regarding the Utes playing on Sundays and General Conference weekend. When he returned my call, Dr. Hill, whom I've never met, started the conversation by saying, "Vai, Rise and shout!" To which I chuckled and answered, "I'm a Utah man, I am."

We shared a few pleasantries and I made him aware that I had written a column last week wherein I hammered him but I hoped he would be willing to discuss the issues I raised. He was incredibly warm and accommodating.

Hill understood and respected my position and informed me that he's asked the Pac-12 if they would steer clear of Conference weekend next year but that it was too late to do anything about this year's schedule. However, the hierarchy of the Church worked with the university by arranging for the priesthood session to be tape delayed to the Institute so that those who chose to attend the game could still see it. He expressed gratitude that Church leaders did that.