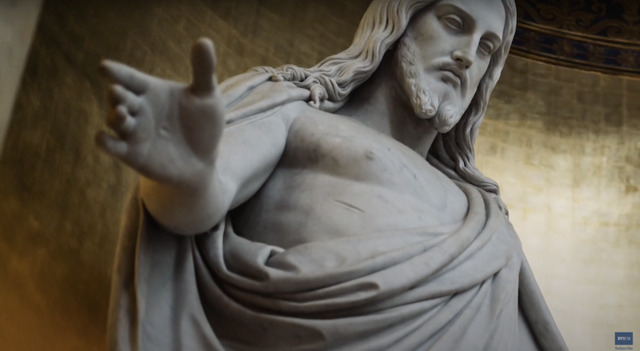 Video: Why the Christus statue is ‘one of the greatest sculptures of Christianity’

In a new video on BYU Magazine’s YouTube channel, Jack Welch discusses the significance of Bertel Thorvaldsen’s Christus statue in Copenhagen’s Church of Our Lady.

In the 1830s–40s in Copenhagen, many people were struggling spiritually, Welch explains, but there were others who were pondering what it meant to follow Jesus Christ. “This period of scriptural pondering opened the door in 1820 to one of the greatest sculptures of Christianity,” he says.

Welch, who is recognized for having discovered chiasmus in the Book of Mormon, goes on to describe the architectural setting of the Christus statue in the Church of Our Lady and how it was unique for its time.

“This depiction of Jesus was not at all typical. Above the high altars of most Christian churches, one finds the pious and woeful depiction of the Crucifixion of Jesus of Nazareth, King of the Jews,” he says, whereas the Christus installed in 1839 shows the resurrected Savior.

Welch describes how the placement of the statues of the Apostles directs the viewer’s eyes to Christ. Additionally, he addresses the significance of other symbolism in the room, such as the pillars standing on either side of the Savior, which are “reminiscent of the two pillars beside the entrance into the ancient Temple of Solomon in Jerusalem.” Above the statue, an inscription in Danish reads, “This is my beloved Son, in whom I am well pleased.”

The Christus statue, Welch continues, is a symbol used in the Church today, and life-sized replicas are frequently seen at visitors’ centers on temple grounds throughout the world.

► You may also like: President Nelson announces new Church symbol

“Through his masterpiece, all can come to appreciate the forgiving, guiding, and loving embrace of the Master. Thorvaldsen’s Christus graciously speaks and relates to all, ‘Peace on earth. Come unto me. My peace I give unto you,’” he concludes.

The awe-inspiring cultured marble Christus statue depicts Jesus Christ just as the scriptures describe Him, beckoning to us with open arms in a most pleasant manner, as if saying: “Come unto me.” Find one for your own home at DeseretBook.com.

Resurrection ChristusResurrection,Christus,
Comments and feedback can be sent to feedback@ldsliving.com