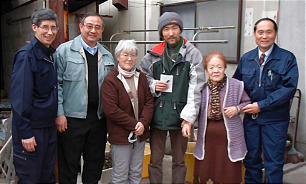 In the wake of 9.0 magnitude earthquake and powerful tsunami in Japan, more than 7,000 Church members have given more than 60,000 hours of service, according to a Church welfare report.

The March 11 quake — the largest earthquake to ever hit Japan — displaced thousands, destroyed hundreds of thousands of homes and buildings and damaged the cooling functions at key nuclear plants in northern Japan, triggering fires and radiation leaks.