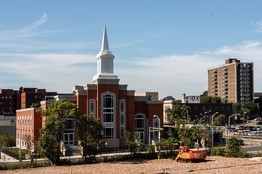 A surge in housing and office development here in recent years has been heralded as a sign that New Jersey's largest city is turning a corner, but Newark's growth has earned another milestone: Its Mormon population is big enough to warrant a church.

A 35,000-square-foot church topped by a 45-foot steeple now stands adjacent to the Newark Broad Street station downtown. The multimillion-dollar Newark Meetinghouse began services in June and has scheduled an open house on Sept. 14.

The central church administration pays for all of its churches and only does so when there is a significant population, said Eric Hawkins, spokesman for the Church of Jesus Christ of Latter-day Saints, the largest Mormon assembly.