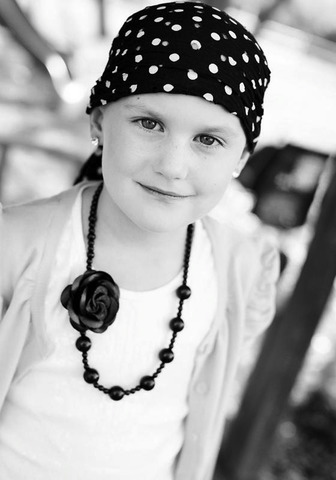 What started out as a quick trip to the ophthalmologist for 5-year-old Jaylie Nielson ended in her being rushed to the emergency room for diagnosis of a possible tumor. Following this day were months of uncertainty and difficulty for the family, but now, because of the love of her ward and community, she and her family will be the beneficiaries of a 5K race and fun run meant to help support them.

“We really feel like we’re being uplifted and helped. We feel like we have angels with us,” said Kajsa Nielson, Jaylie’s mom.

It started when Jaylie was taken to the eye doctor in April for vision problems. Her family thought glasses or surgery might be the solution. But during the exam, the doctor saw unusual swelling and later that day, Jaylie ended up in the emergency room. An MRI scan revealed Jaylie had a brain tumor the size of a grapefruit.

A day and a half later, Nielson’s tumor was removed, but within a few days, she was diagnosed with a rare and aggressive form of brain cancer called Supratentorial Primitive Neuroectodermal Tumor (PNET).

“Parts of the recovery were quite scary but she really did well,” Kajsa said. “Our radiation oncologist said that she did better than most of the kids her age who go through that.”

Jaylie’s mom said the scariest moments occurred in the hospital.

“When she was being wheeled into the operating room for her brain surgery and we had to leave her crying at the entrance, it was horrible,” Kajsa said. “She was scared and we were scared not knowing what may or may not happen.”

Jaylie’s mom said the scariest moment for Jaylie was after her surgery when she started noticing some things were different than they were before the surgery.

But even with those scary moments, Jaylie has shown a good attitude about everything. Jaylie and her little sister play doctor and rehearse radiation and chemo techniques, and Jaylie doesn’t mind going to the doctor, her mom said. Jaylie even enjoyed the radiation time because it gave her a little chance to rest.

“She’s just doing amazing so I know we’re being helped beyond what we’re capable of,” Kajsa said.

Jaylie received head and spine radiation treatments daily for six weeks in June and is set to start six months of chemotherapy later this month. Meanwhile, many members of her ward have reached out the family to support and help Jaylie.

Kajsa said they have felt the comfort from all the prayers and fasting. Many people have been praying for Jaylie and putting her name in temples all across the world. Kajsa said it’s been amazing to see the ward come together to help.

“Even though this is a horrible thing that’s happening we’ve seen so much good come out of it,” Kajsa Nielson said.

The family has felt overwhelmed and amazed as people have been willing to help however they can, including bringing over meals, cleaning the house, babysitting and bringing gifts for Jaylie.

“My husband and I probably cry once a day,” Kajsa said. “Happy tears of people reaching out and helping us and doing things for us.”

In fact, two women in the ward, Heather Himmer and Heather Jim, separately came up with the idea to organize a race. Neither of the two knew the other had the same idea. Now they are now working together to coordinate the race.

“We know that it will benefit the family financially to help with medical bills, but even more so, we hope that the event will help the family feel the support and love of the community,” Jim said.

Kajsa said she explained to Jaylie there will be a 5k race and that are people who are doing something to raise money to help with all her bills.

“She was talking to my husband and I the other day and she was saying she wanted to do a lemonade stand so she could raise money for her cancer,” Kajsa said, illustrating Jaylie’s extraordinary personality. “She knows it costs a lot, and she knows that people are donating money for her.”

Aside from the good moments they share, Jaylie’s mom said what really gets them through the hard and scary times are their testimonies of the gospel of Jesus Christ. They are comforted knowing Heavenly Father has a plan for Jaylie, and being able to put trust into that plan brings them peace.

Because the future is so unknown and the past is hard to revisit, the family focuses on the here and now. The Nielsons have spent a lot more time on their knees asking for help, and Kajsa said Jaylie has an amazing attitude and great faith that helps the rest of the family be strong. She said she thinks Jaylie is still a little scared, but she responds similar to how her family responds.

The 5K and Fun Run will be held in Leander, Texas, on August 13. All proceeds from the event will go toward Jaylie’s medical expenses.

Those interested in participating can volunteer in many ways, including setup and cleanup, registration and running various booths. For more information, contact Heather Jim (512-897-7698) or visit http://www.teamjaylie.org/.

**Update: The 5K raised over $30,000 for Jaylie, enough to cover her insurance deductible for three years. Thanks to all those who contributed!