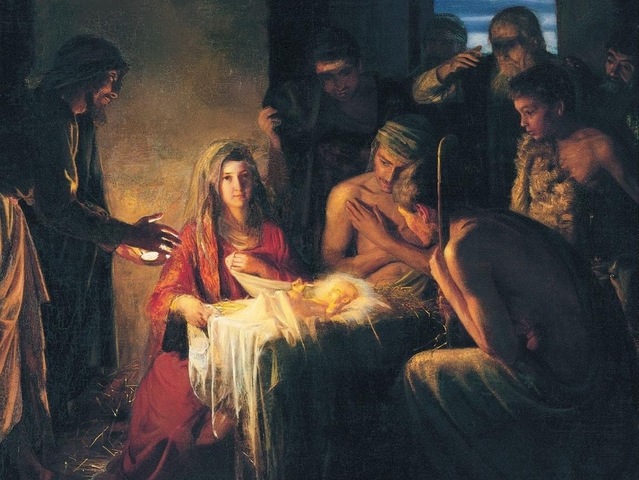 Was Jesus Born in December After All? (What Prophets and Apostles Have Said)

It's likely that you've heard at least once in your life that Jesus was born on April 6. But is that really a true doctrine? How do we know?

In his 1915 classic entitled Jesus the Christ, Elder James E. Talmage maintained that Jesus Christ was born on April 6 in the year 1 B.C. Talmage was apparently the first LDS writer to propose this particular date. Nearly a century has passed since his book appeared, and in that time it has become practically axiomatic among Latter-day Saints that Jesus was born on April 6 in that year. But was He? Here is what prophets and apostles have said regarding the date Christ was born.

During the 19th century, latter-day prophets from Joseph Smith to Lorenzo Snow evidently made no specific comments on the date of Jesus’s birth. Never did Joseph interpret the wording of Doctrine and Covenants 20:1 to suggest that April 6 should be regarded as the Savior’s birth date, although he said that it was “by the spirit of prophecy and revelation” that April 6 was pointed out to him as the precise day on which he “should proceed to organize” the Church of Jesus Christ in this dispensation. Similarly, as far as I have been able to ascertain, Brigham Young, John Taylor, Wilford Woodruff, and Lorenzo Snow recorded no comments on the subject of Christ’s birth either.

One LDS apostle in the 1800s did offer a proposal for Jesus’s birth date that was different from the traditional Christian date of December 25. Elder Orson Pratt proposed the date of April 11 in the year 4 B.C. as the Savior’s birthday, based on his own calculation of the number of days between the signs of Jesus’s birth and death as described in the Book of Mormon. But Elder Pratt’s suggestion of April 11 never captured the imagination of the LDS public in his day and has been largely forgotten.

Elder B. H. Roberts, however, felt that the passage in Doctrine and Covenants 20:1 did support the year 1 B.C. as the year of Jesus’s birth. And the notion of Jesus having been born in the spring season was not uncommon among the Latter-day Saints in the late 1800s. In a 1901 Christmas message from the First Presidency, President Anthon H. Lund mentioned April as the month he preferred for the birth of the Savior.

During the 20th century, three different LDS apostles published major studies on the life and ministry of Jesus Christ and in them offered models for the date of Jesus’s birth. The diversity of opinion in these three studies is of particular interest.

The first, as already mentioned, was Jesus the Christ by Elder James E. Talmage. This book was commissioned by the First Presidency, written in the Salt Lake Temple, and officially published by the Church, becoming the first systematic commentary on the life of Christ prepared by a Latter-day Saint authority. Talmage based his statement about Jesus’s birth date on the idea that D&C 20:1—which names Tuesday, April 6, 1830, as the date of the organization of the latter-day Church—means that exactly 1,830 years had passed (to the day) since the Savior’s birth. President Joseph F. Smith immediately endorsed Talmage’s book, while Elder Hyrum M. Smith of the Quorum of the Twelve Apostles, in his 1919 commentary on the Doctrine and Covenants, expressed the view that D&C 20:1 only “means to say . . . that the Church was organized in the year commonly accepted as 1830, A.D.”A significant number of later general authorities, including Church Presidents Harold B. Lee, Spencer W. Kimball, and Gordon B. Hinckley have commented on the April 6 date warmly and acceptingly but without explanation or greater specificity.

Elder Talmage had stated his position in words perhaps implying that this view or belief was obligatory on the entire membership of the Church: “We believe that Jesus Christ was born in Bethlehem of Judea, April 6, B.C. 1.”

This statement notwithstanding, the two highest-ranking general authorities who subsequently published their writings on Jesus’s life and ministry took positions different from Elder Talmage’s. One of them was President J. Reuben Clark, who served as both First and Second Counselor in the First Presidency and published Our Lord of the Gospels in 1954. This book was reprinted as an official publication of the Church when it was released as a Melchizedek Priesthood manual for 1958.

In Our Lord of the Gospels, Clark pointed to the traditional early winter time frame for the date of Jesus’s birth. He explained: “I am not proposing any date as the true date. But in order to be as helpful to students as I could, I have taken as the date of the Savior’s birth the date now accepted by many scholars,—late 5 B.C. or early 4 B.C.”In the timetables he employed in his book, Clark listed his preferred time range for Jesus’s nativity as December of 5 B.C., and the time range of the Annunciation to Mary as nine months earlier in March of 5 B.C.While not insisting on a specific date (such as December 25), President Clark noted the historical strength of the early winter tradition.

Elder Bruce R. McConkie was the third general authority to prepare a systematic study of the life of Christ. Deseret Book Company published the four-volume series, The Mortal Messiah, beginning in 1979. In a lengthy study note appended to chapter 20 of the first volume (on the Savior’s nativity), McConkie discussed several models for dating the birth of Jesus. In contrast to Talmage, McConkie stated: “We do not believe it is possible with the present state of our knowledge—including that which is known both in and out of the Church—to state with finality when the natal day of the Lord Jesus actually occurred.” McConkie then reviewed the positions and reasoning of both Talmage and Clark with regard to Jesus’s birth date and stated that he would follow Clark’s course.

It seems clear from the different approaches presented in these three studies that there is no authoritative agreement or position on the issue of the birth date of Christ that must be regarded as binding on the membership of the Church. But in the last century, much new information has come to light about the New Testament, and new data from archeological and historical sources, combined with a reexamination of the scriptural accounts involved, suggest that the April 6 dating should be reconsidered.

Dating the Birth of Christ and a Response 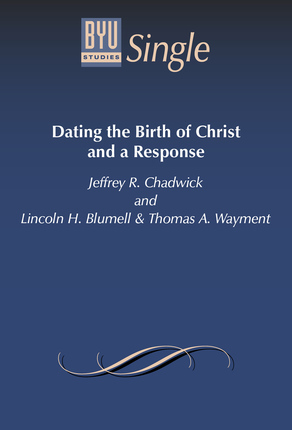 In this enlightening eBook, just $1.99, read both Jeffrey R. Chadwick's fascinating theory that narrows the birth of Christ to December of 5 B.C., as well as the equally fascinating rebuttal from Lincoln H. Blumell & Thomas A. Wayment, who explain why they believe the birth of Christ can't be narrowed to such a specific timeframe.