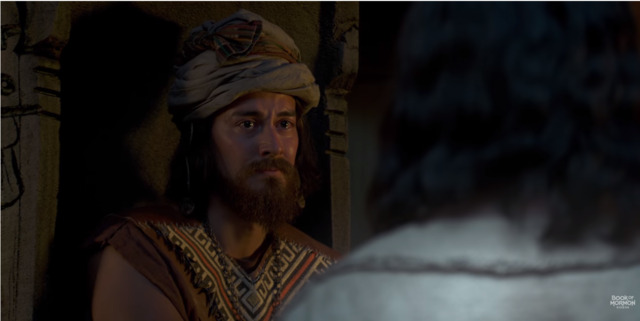 A man comes running from a city gate with two men who appear to be soldiers chasing after him in the night. Talk about a riveting start to the latest Book of Mormon video!

Unlike the white-haired Abinadi of Arnold Friberg’s paintings, Abinadi in the new Book of Mormon video is a lot younger, and the video definitely gave me a few new perspectives on the story.

First, some quick context. A group of people, led by a man Zeniff, left the main group of Nephites because they wanted to live in the land their inheritance—a land where the Lamanites then lived. They worked out a deal with the Lamanites and began living righteously there. Until Zeniff dies and his son Noah enters the picture.

For me, this context is powerful when in the video you hear Abinadi recite the commandments, looking straight at King Noah during “Honor thy father and thy mother”—something Noah was definitely not doing. Noah was clearly neglecting his father's promise to live righteously.

Another powerful part of the video for me was Abinadi’s reaction to his role as prophet. When threatened with death, Abinadi very calmly and clearly states that his message is not finished. He has spent the first part of his speech condemning the actions of the priests and clarifying the law of Moses. But the most important part of his message—the prophecies of Jesus Christ—had not yet been delivered.

Which brings me to my final takeaway from this latest Book of Mormon video: the conversion of Alma. Whenever I have read the story of Abinadi, Alma’s part has been rather small in my mind, up until the end when he somewhat unexpectedly defends Abinadi. Not until watching the video did it occur to me how involved Alma actually is in Abinadi’s entire story. I loved the way you really get to watch Alma’s transformation in the video, as you see him gathering with others in King Noah’s court, becoming a priest, fighting against Abinadi’s words, and ultimately beginning to think there might be some truth to them, until finally he defends the prophet and runs for his life. He is then shown later recording and teaching Abinadi’s words to the people in secret.

Abinadi actor Ryan Wood says that his role in the videos really helped him think about Abinadi’s life. “[My wife] was there to support me through the martyrdom scene which, was very late at night, and a lot of emotions went into it,” he says. “I sort of imagined Abinadi thought he was a failure at the time.”

► You'll also like: A Peek Inside the Making of the Book of Mormon Videos

And yet, if Abinadi hadn’t boldly delivered his message in the court of the wicked leaders of the people, Alma would never have had the words of Christ sink into his heart. The people never would have risked their lives to be baptized or made covenants to stand as witnesses—like Abinadi had—"at all times, in all things, and in all places" (Mosiah 18:4).