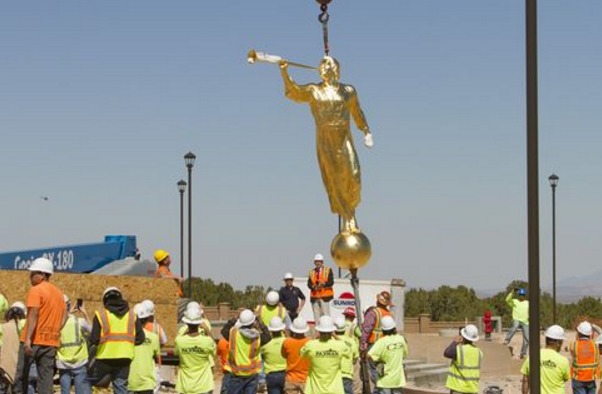 On Thursday, an angel Moroni was lifted atop the Cedar City Utah Temple, marking another historic milestone in this temple's construction.

Saints who gathered for the event began singing hymns as they waited, then cheered as the angel was lifted into the air. A little girl even squealed over and over again, "Oh my goodness" as the statue was being placed, according to The Spectrum.

Ten-year-old Porter Burt told The Spectrum that the experience was "a once-in-a-lifetime thing" he was excited to tell his grandchildren about in the future. "It really touched my heart," he added.

The angel, which act as both a powerful symbol and as a lightning rod on many LDS temples, is just another step toward the temple's dedication, which is estimated to happen in late 2017.

Read more at The Spectrum.

Lead image from The Spectrum.